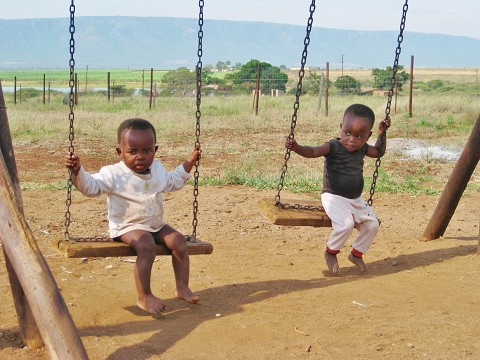 any other day of ministry with my comrades of T-Squad – the
air was hot, I was smelly, and orphans were tugging on anything and
everything that was attached to my body.
I saw her pushing herself down that long and dusty road to nowhere accompanied by only a malnourished and
starving puppy. This old Swazi woman, ever so slowly maneuvered her way
down the dirt road.
Her arms tired, her face hopeless, and her spirit wounded,
this woman was in a
wheelchair that looked like it had been fashioned in the early 19th
century.

There was no telling how long she was on the
road by herself in the hot African sun unable to move and get herself
home.  My squad mate and I ran over to her with the translator to see if
we could help her out.  We asked her if we could push her home and she
politely smiled and agreed. 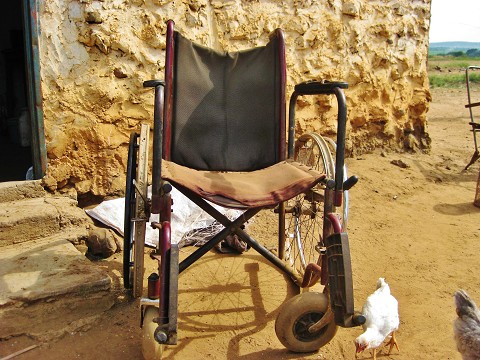 When
we finally arrived at her home, she ever so  climbed out of
her wheelchair and onto the step of her doorway.  We asked her if she needed prayer
and when we did, my life changed.  She began to tell her story through
some of the most heartfelt tears I have ever witnessed. Her name was
Maria.

Maria lived by herself in the
middle of the hot African bush with no water, no food, and no
community.  At one time  Maria had a good life.  She had 8
healthy children and a husband who loved and supported her, but her life dramatically changed. Maria helplessly watched as
all 8 of her children passed away, possibly from HIV, sickness, or other
tragic incidents.  They left no children behind, just a deep wound in
Maria’s heart.  Her husband died just 3 years ago, which left
Maria alone – completely alone.
One night while she was sleeping, three
men broke into her house to rob and kill her.  As she tried to escape,
the men beat her legs with hammers so that she couldn’t run away.  After
they had robbed and beaten Maria, they left her to die.  Miraculously, Maria survived,
but only after losing one of her legs.
For
three years, Maria has been surviving on her own, simply existing in
this harsh and cruel world.  No joy, no happiness, and no one to care for
her or take care of her.
As she told her story, tears  poured
down her wrinkled Swazi face.  How do you pray for a woman who has
nothing?  How could I possibly tell her that God loved her when in fact
her life reflected something completely opposite?  Her children were
dead, her husband was deceased, she was nearly murdered in her own home,
and nobody cared or even knew that she existed.
These are those hard
moments whe 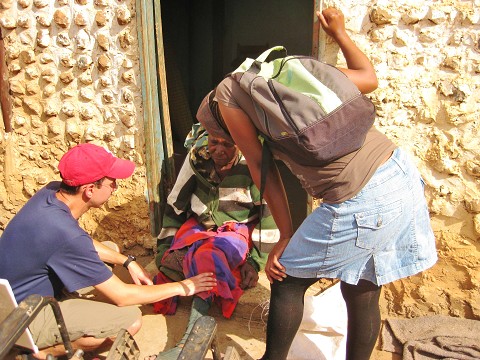 re you have to pray with faith-filled eyes, not simply
through the eyes that were witnessing such a heartbreaking encounter.
Maria was in fact a believer, and despite everything, KNEW that God loved
her.  She didn’t feel like a victim and death did not have a hold on
her.
After
Evan prayed, Maria never even asked us for money or a handout.
Instead, in the midst of her sobs, she told us she just wanted a little
bit of food – she was hungry.  She was a 65 year old
orphan with no family, no place to call a home, and nobody to love her.
Evan prayed for her and promised her that we would not only
bring her food the next day, but a pair of shoes as well.  She managed
to get around in her wheelchair in the dirt with only a sock on her
foot.
I’ve fed orphans all over the world, seen the
homeless living in cardboard boxes in the worst of slums, but I have
never met someone like Maria.  Someone surviving alone and forgotten about by the
rest of the World.  It made me reflect upon my own life back in
Kentucky. 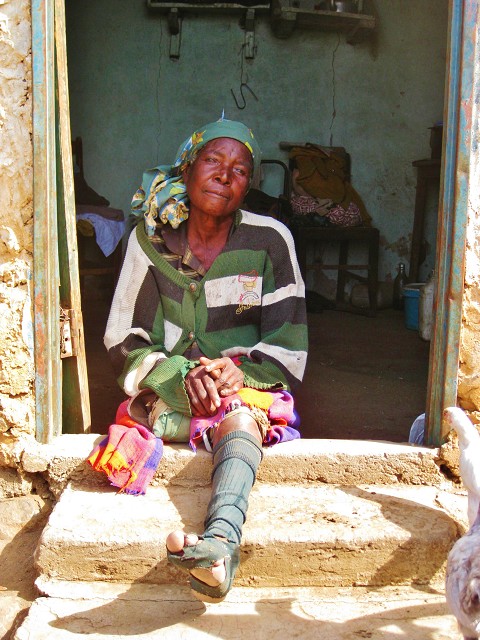 I live my life overlooking the Maria’s in my own world.  I’m
busy worrying about ME, living for ME!  The truth is, I didn’t have to
come all of the way to Africa to find my Maria.  I could have simply
looked out my back door.  The question is, why don’t we even notice?
Why don’t we intervene when we see an injustice in the world?  Why don’t
we become a voice for those who can’t speak?

Maria  is a fighter. When I look at
Maria, I see a proud daughter of the King Most
High.

The good news is, we can make a difference. If you’d like to help care for Maria, please make a donation here (put “Maria” in the Note section) and we’ll make sure that she gets food, water, and feels the love of others again.