A moral tsunami sweeping young people out to sea

Having spent the past month in Africa with the World Racers, this idea of abandonment has really become a reality. This is a group of young Jesus-followers who aren’t settling for Vacation Bible school or a one-week trip to Mexico to build houses; they desperately want to see the kingdom of God a…
By Seth Barnes
05 July 2007, 12:07 am
By Seth Barnes
05 July 2007, 12:07 am

Having spent the past month in Africa with the World Racers, this idea of abandonment has really become a reality. This is a group of young Jesus-followers who aren’t settling for Vacation Bible school or a one-week trip to Mexico to build houses; they desperately want to see the kingdom of God advanced, and the Lord has been faithful with signs and wonders. 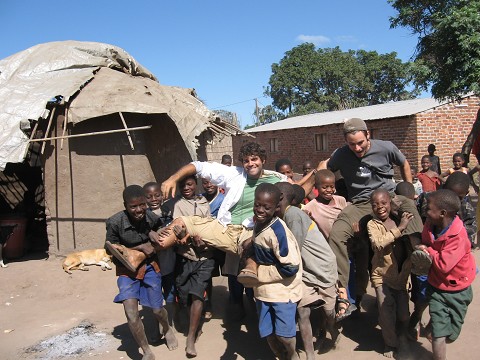 Jesus replied, “You know how to interpret the appearance of
the sky, but you cannot interpret the signs of the times.” -Matthew 16:3

As a teenager, my best friend’s dad was a pastor of a large
PCUSA church who preached on this passage.
My friend showed me where his dad kept his pornography magazines in his
office over the garage. His dad later
divorced his wife who had MS, moved from the Midwest to Florida, became a used car salesman, then
died of cancer from smoking too much.

The Bible says, “Don’t let many of you become teachers” for a reason.

Most of us are primarily tactical, that is, we’re not
strategic. Jesus says to pray for daily
bread because we tend to live day-to-day.
We do what we’ve always done, not really analyzing whether or not it
will make any long-term difference. It
is this approach that allows one generation to completely fail in the one task
that it views as more important than any other, the task of passing its values
and faith on to its sons and daughters.

Because of the enormous disconnect between the way that
Jesus raised disciples and the way that we disciple, young people are failing
to understand and follow his radical gospel. Barna statistics show that the percentage of teens who are
evangelicals declined from 10% in 1995 to just 4% today. One student in six will continue going to
church after leaving the church.

The elephant in the living room is that within a generation,
the Church in America
will have, for all practical purposes, died.
Europe has pioneered the downhill slope
to oblivion. The seat of the Reformation
has become an agnostic’s paradise. Its
churches stand as empty monuments to a bygone era when families walked to their
local parish.

If you want to see the future of Des
Moines or Phoenix or Atlanta, all you have to
do is catch a flight to Heathrow and ride the tube in any direction for half an
hour. Get off and ask for the local
church. It will be a beautiful old
building that sits empty, but for a few old people on Sunday. That is America’s ghost of Christmas
Future. About 5% of the population believes in Jesus and less than
half the population believe in God. A
foggy nihilism as bleak as the weather has settled over the population where
once glad hymns were sung.

We are sliding in this direction much faster than we
realize. The Asian tsunami offers
a good analogy. First, the water along
the beach’s edge was sucked out to sea leaving behind schools of fish flopping
in the sun. The parallel is that faith
in America
is similarly drying up. We see the
individuals who don’t make it, and we see the dry moral environment. But what we can’t see is the tidal wave of
societal change that will occur as the next generation matures and has nothing
to pass on to their children.

Given this bleak forecast, what is a true believer to
do? Jesus gave us the answer repeatedly
when counseling people caught in society’s death grip. “Get radical!” Peter Lord says, “Go with the goers.”

Take the young people you know with a fire in their bellies
and spend a month or two ministering in the poorest slums you can find.

Leave everything behind. Discover the Jesus of Matthew 10. The following summer, if you still have a
job, spend two months in the slums of Bombay. You’ll find that Jesus has gone on ahead and
is waiting for you there.

If you’re really daring, send your young Jesus-follower off on the World Race

for a year-long initiation process that will mark him or her for life.