A story of kidnapping & rescue 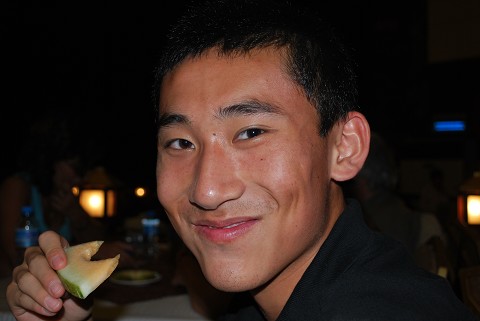 I was born in Ningxia, China on December 1st 1991.  My parents had to keep me a secret, because in China there is a One Child Policy that prohibits most families from having more than one child.  Since I was the second child born to my parents, they gave me to my uncle and grandmother to raise me.
Growing up I always thought my uncle was my dad.  He was a farmer in the countryside so we lived very simple lives.  My father would send money to my uncle to help him.  My uncle took good care of me, and raised me as his own son.
When I was about to start school at age five, my parents decided they wanted me to live with them to go to a better school in the city.  They had saved enough money to pay the government officials to register me as their second child, so that they could now raise me.  The problem was they were like strangers to me and I missed my family back in the village.  I was too young to comprehend that these people were my parents and that they wanted me back.  My parents saw how unhappy I was and decided to let me go back to live with my uncle.
What happened next was one of those life-altering moments – I mean literally my life was about to take a whole new direction.  My father hired a driver so he could take me back to the village.  On the way to the village my father asked the driver to stop at a produce market so he could buy some food to take back for the family.  He was in the market for five minutes and when he came out the driver was gone, and so was I.  All I remembered was riding on a bus with this man for a really long time.
I have fragmented memories of living with this man and his wife for several months.  He was very abusive when I didn’t listen.  I knew this person wasn’t my dad or my uncle so I tried to run away a lot.  He must have gotten fed up with me because the next thing I remember is this man leaving me in a restaurant.
It was 10 months from when I was kidnapped that the Chinese police found me wandering the streets under a bypass in Luoyang, Henan- a province over a thousand miles away from my family’s home.  The police took me to the local orphanage, where I lived for about two years until I was adopted by a woman from America.  She first met me the summer of 2000, when she was on a mission trip to my orphanage; and then she came back in 2001 to adopt me.

My new mother, Julia lived in Virginia.  I went to elementary school at Hayfield Elementary in Alexandria, which was very diverse so it was easy to fit in.  I made friends quickly through sports and had good memories through Elementary School.  We moved to Easton, Maryland as I was entering Middle School.   It was a huge change and at first I hated it, but it got better as I started to make friends through skateboarding and sports.  Middle school went well, but then High school was a different story. Freshman and sophomore years went well but the summer before my junior year I had another one of those life-altering moments!

I had been haunted by fragmented memories of my past for years and when I turned 17 I asked my mother to help me find out what really happened in China and why my parents gave me up.  It was May 31, 2009 when my mother called me downstairs and told me she had some big news for me.   SHE LOCATED MY BIRTH PARENTS!  We learned that my birth family did not abandon me, but that I was kidnapped and they had been searching for me for years.
I was in shock and couldn’t believe it until I saw the pictures of me with them when I was just a kid.  We went back to China that summer for a reunion.  I was so nervous about the trip and later realized I wasn’t emotionally ready for the reunion.   I had a lot of anger towards my birth parents because I felt it was their fault for everything that had happened to me.
When I got back from that trip, everything I thought I knew had changed.  I had no clue who I was anymore.  Before the reunion trip I knew I wanted to play college lacrosse, get a good job, get married and have kids.  After the reunion I fell into a deep depression, skipped school, slept all day and avoided my friends.  I hated everything, even the things that once made me happy.  I felt no purpose in my life.  My depression got so bad that I wanted to end my life.
I always went to church as a child, but stopped going as I got older.  I thought being a Christian was boring.� Another turning point came when a couple from our church invited my mom and me for dinner one night.  They told me about something called YOUNG LIFE.  I got to hear the Young Life leader’s story and how he grew up.  I started to talk to him more about God and more on how he impacts people’s lives.  As the year went on we got deeper into our conversations.  I started to trust him so I opened up to him more.
On December 5th, 2010, I accepted Jesus Christ into my life and after that everything seemed to turn around for me.  I was really involved with Young Life during my senior year and when summer came I volunteered on work crew at Lake Champion.  For the first time I became proud of my life story- all the heartache and struggles.
I keep in touch with my high school guidance counselor and we went out to lunch over the summer.  Wanting to continue to grow in my faith and not really knowing whether college is right for me at this time, I asked him for guidance.  He told me about the World Race.  I haven’t stopped thinking about it since.  God has crazy ways of doing things, but I believe he has been preparing me for this trip I am about to embark on in less than a year.
I don’t regret any part of my childhood.  Without all of the crazy turn of events, I wouldn’t be where I am today.