Megan Kennedy shares this touching story from Cambodia. On a small plot of land just outside the city of Kampong Cham, the people of "42 village" reside. 42 village is a place of outcasts, ignored by the government, deemed unworthy of living in the city by the people of the surroundi…
By Seth Barnes
03 September 2013, 12:09 am
By Seth Barnes
03 September 2013, 12:09 am 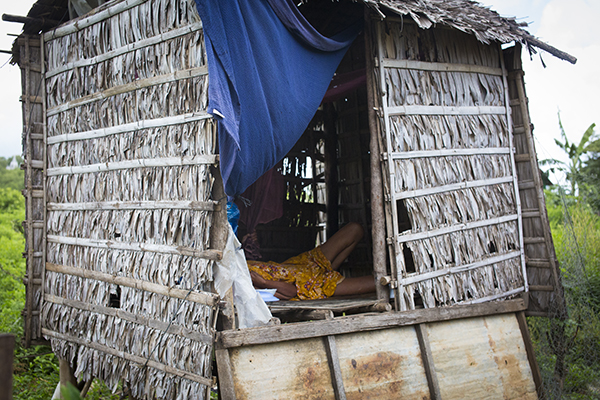 On a small plot of land just outside the city of Kampong Cham, the people of "42 village" reside. 42 village is a place of outcasts, ignored by the government, deemed unworthy of living in the city by the people of the surrounding area. This village is rife with poverty. Children go unfed and diseases untreated. The only two sources of water are broken, and the people are often dependent on care from the Youth Development Center in Kampong Cham, our ministry contact this month, to meet their needs.

In this place outcasts, there is a woman named Som. She is an outcast among the outcasts.

Som is a captivatingly beautiful woman. Her deep blue eyes and soft voice speak only love.  Som captured my heart from the moment I laid eyes on her the first day our team entered the village. As we walked up the dirt road lined with huts, a small bamboo structure pushed back from the main path caught my eye. Glancing off the path, I noticed a woman lying on a mat in this tiny bamboo platform. As we made eye contact I asked our host from the Youth Development Center, "Who is that?"

"That is the paralyzed woman," she told me. "You can go pray for her."

As I made my way over to Som, her eyes widened as if to say, "Are you really coming towards me?"

Upon arriving at the hut, I noticed that the only thing covering Som's naked body was a small piece of yellow fabric. Her frail arms and legs were exposed and her "hut" (for lack of a better word) was only large enough to hold Som, a mat, and a jug of water. Empty bowls and a glass lay beside Som. The floor shook as I placed my hands beside her, and I noticed holes in the roof and walls of the hut. An opening was cut in the bamboo underneath Som's bottom to enable her to go to the bathroom without being moved.

Through a translator, a few of us introduced ourselves and told her that we were there in the village to get to know her people and to love them. We told her that we were there to love her as well. She looked up at me and as I reached out to hold her hand, I whispered the one Khmer phrase that I have learned by heart since arriving in Cambodia, "K'nom s'roline n'yak." I love you. Som's face lit up and she smiled.

Since that first day in the village, Michelle and I have been praying for Som. Her story has captured my heart and her smile is engrained in my mind. Each day we enter the village, we first visit with Som. We learn more and more about her.

Today, as we went into the village, we stopped to see Som. But something was different this time. God spoke softly, "Stay with her today." So instead of saying hello, exchanging a few remarks, and moving on to other huts, Michelle, Daru (our translator,) and I stayed with her. God continued to push into my heart. "Sit in her hut with her," He said to me. I told Daru to ask her if I could sit with her and Som's eyes widened. 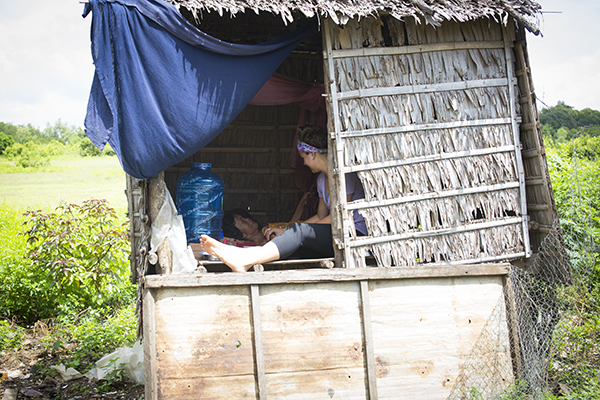 As I took off my shoes and climbed into the tiny hut, tears began to fall down Som's face. I held one of Som's hands and Michelle held the other and we began praying for her. A few minutes later, we asked Daru what Som was thinking, as tears were still running down her face, and after talking to her for a minute he replied, "She said that her people have forgotten her. That her family does not love her anymore and that she is alone here. Her people do not come to her. She cries every night because she is so hungry and alone."

"I have not forgotten her," I heard God say. "I love this beautiful daughter of mine. I hear every cry of hers and I love her. Though the world ignores her, I do not."

I relayed this to Daru who told Som what I had heard. As Daru was telling Som how precious she is and how much she is loved by the Maker of the entire universe, Som began to weep. Deep, loud, heartfelt sobs. Som grabbed me and pulled me closer and for minutes we wept together. 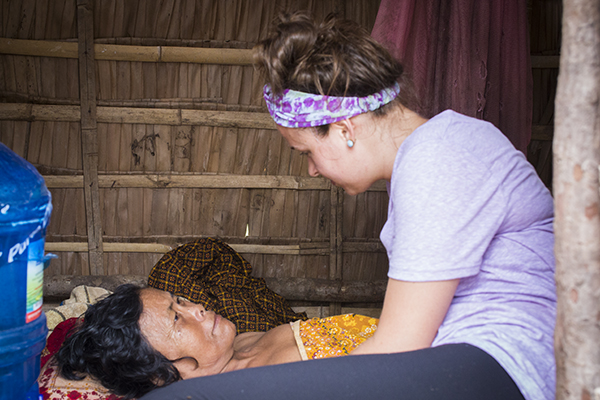 After a few minutes, she looked up and said something to Daru.

"She understands," Daru told us. This woman who had never experienced God's love before looked up and declared, "I believe."

We all began to weep alongside Som. This time, tears of joy.

I believe that God will heal Som. First and foremost, that He will continue the healing that has already begun in her heart. We also believe that through Him, we will witness complete healing of her body. We beg and plead for God to heal her legs and that Som will pick up her mat and walk.

This is a mighty prayer. But we know that we serve a mighty God.

We know that Som has been placed in our lives and on our hearts for a reason. And we have seen just how powerful prayer can be. Today as we spoke to Som, she began to weep as we told her that we would share her story with many people. That though the village has forgotten her, God has not. And His people have not. We told her that people around the world would be praying for her and for her healing.

We believe that Som will be a testimony of God's love and His power in 42 village. We believe that we don't have the power to heal Som's heart or Som's body, but that God does. And that God will.

What would you do if you were going to be killed because you were smarter than your peers? Wo…
05 September 2013

The following is the rest of the story about Som, a paralyzed woman Megan Kennedy met in Cambodia…
05 September 2011