Africa – the new face of Christianity 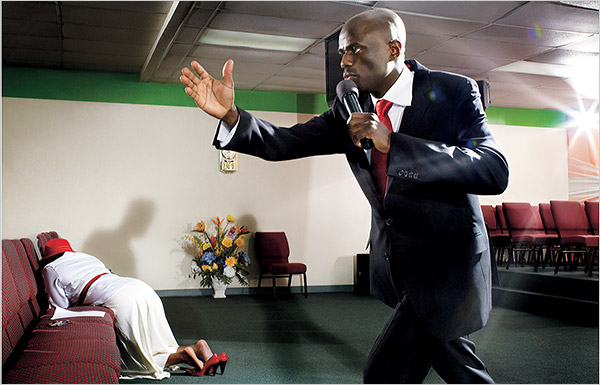 Rice begins the article by talking about revival:

Revival is an eternal theme in the history of Christianity. Time after
time, evangelical fervor ignites, burns itself out and then re-emerges
in some altered and surprising form, in constant cycles of migration
and renewal.

The ferment of the Reformation and the Counter-Reformation
sent Puritans to New England, Quakers to Pennsylvania
and Jesuits into the wilds of South America. The missionary movements
of the 19th century inspired pious adventurers to travel to Africa and
spread, in the famous formulation of David Livingstone, “Civilization,
commerce and Christianity.”

Today the process is reversing itself, as
the population of churchgoers dwindles in Europe, remains fairly static
in the United States and erupts in the “global south” – a geopolitical
term that encompasses Africa, Latin America and much of Asia. Seven
years ago, in a book titled “The Next Christendom,” Philip Jenkins, a Penn State
religious scholar, predicted that the global south would eventually
come to represent Christianity’s center of gravity. Now it appears that
phenomenon is starting to manifest across a broad spectrum of Christian
belief, challenging patterns of leadership and notions of religious
identity that in some cases have stood for centuries.

I’ve been fortunate to travel somewhat regularly to Africa and to partner with believers there in ministry. I’m continually challenged by the seriousness with which they treat not only spiritual issues like healing and demonic possession, but also fundamental issues such as the authority of Scripture in a Christian’s life. If, like Esau, we Westerners are trading our inheritance, then African Christians may be the ones who are the inheritors.
As Philip Jenkins notes in The New Faces of Christianity, the northern hemisphere may need to look to the South for a renewed religious conservativism if we are to remain faithful to the Bible. The sad truth, according to Jenkins, is that many North American and European churches are “willing to accommodate liberalizing trends in the wider society, while their African and Asian counterparts prove much more conservative. These controversies are grounded in attitudes to authority and, above all, to the position of the Bible as an inspired text.”
For Africans, the Bible is relevant in the way it addresses the issues of poverty and debt, famine, racial oppression, and persecution.  Their poverty promotes “the awareness of the transience of life, the dependence of individuals and nations on God, and the distrust of the secular order.”
Isn’t it just like the Lord to do this – to turn our world upside down, humbling those of us who have taken Jesus for granted while lifting up those who recognize him for who he is? I’m committed to joining my brothers and sisters who have taken the torch that the church elsewhere may be laying down, and encouraging them as they run with it. Are you with me?
*Photo courtesy of NYTimes.com