America is becoming a mission field for Africans

Just saw this on Yahoo: Nearly every week, new visitors arrive. They want to see the megachurch that was built in the unlikeliest of places by the unlikeliest of men. The Embassy of the Blessed Kingdom of God for All Nations was founded 13 years ago by a Nigerian immigran…
By Seth Barnes
25 November 2007, 12:11 am
By Seth Barnes
25 November 2007, 12:11 am

Just saw this on Yahoo: 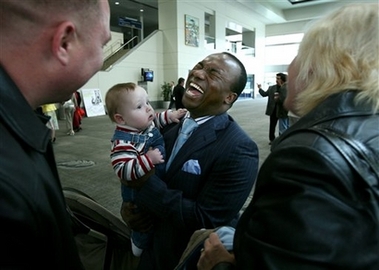 Nearly every week, new visitors arrive. They want to see the
megachurch that was built in the unlikeliest of places by the
unlikeliest of men.

The Embassy of the Blessed Kingdom of God for All Nations was founded 13 years ago by a Nigerian immigrant, Sunday Adelaja, in Kiev, Ukraine.

In a predominantly Orthodox Christian country where racism is
pervasive, Adelaja created a Pentecostal church with 30,000 members.

But the church aims to be far more than a curiosity. Like the pastors who travel to Kiev to see him, Adelaja believes God’s Embassy can be a model worldwide.

The next stop in his bid for global reach is the United States.

“America is fast becoming a mission ground again,” Adelaja said in a
phone interview from Sacramento, Calif., during his latest trip through
the country. “We are surprised that the Americans who preached to us,
the passion they had is almost already gone.”

Adelaja is among a stream of pastors from Africa and other countries
starting hundreds of churches in the U.S. Their congregations back home
are bursting with worshipers as Christianity advances through the
developing world. The clergymen see American churches as floundering —
focused more on money than God and filled with stale preaching and
sinfulness.

They hope to save the country that brought them the faith.

“When the values are crashing, you have the largest number of
abortions, divorce and school shootings. These things are very sad,”
Adelaja said. “As America goes, so goes the world. We shouldn’t allow
the Christian influence to diminish in this country.”

His goals may seem unrealistic, but researchers who study global
religion are already calling this the “African century” of
Christianity. African churches — with their zeal and resourcefulness —
are poised to become a force not just in America but around the world.

Adelaja trains mission workers in Ukraine
and, through them, he says he has already started more than 600
churches in dozens of nations. In the past few years, he has been
traveling around the U.S., building ties with pastors, especially
leaders from the Pentecostal and charismatic traditions, known for
spirited worship and speaking in tongues.

“At present, he doesn’t have great influence,” in the United States,
but has a “network of fans,” said Tony Carnes, who studies African
churches in the New York area and beyond. “This current trip is a sustained effort to bring Adelaja to the greater church audience.”

God’s Embassy claims 20 churches in America,
built mainly through Ukrainian and Russian-speaking immigrants and
their U.S.-born children and friends. Last year, he started History
Makers Bible School in New Jersey and says 200 or so pastors from around the country attend the weekend classes.

The Kiev
megachurch funnels about $200,000 each year to its American offshoots,
which serve an estimated 5,000 people, Adelaja said. In sharp contrast
to other African-led churches in the U.S., Adelaja says his American
congregations, usually called God’s Embassy, are overwhelmingly white.

The pastor’s big push comes in January when he joins a conference of American and overseas pastors and business leaders in Atlanta
to improve leadership in churches. Shortly after, he plans to release
his book and workbook called “Church Shift,” to help U.S. pastors learn
his strategies for reaching nonbelievers.

Adelaja, 40, certainly sounds like many conservative Christians in the U.S.

He says secular Americans are discouraging Christians from sharing
their beliefs. “You want to give minorities the freedom to talk, but
you want to make the majority quiet,” he said.

Social ills — from teen pregnancy to government corruption — can be
solved through the values that Christianity teaches, about love,
purity, fear of God and honesty, the pastor said.

For more info go here and put in the date 03-17-06 in the Archive section.
Also, check out Adelaja’s church.