An unsung hero in my life 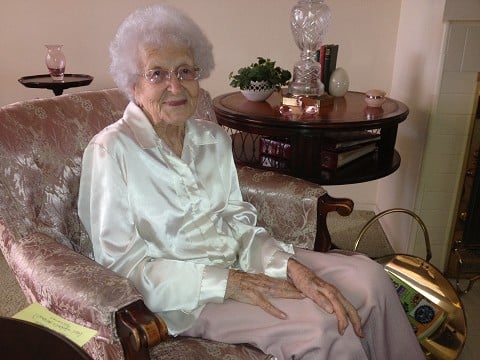 At 94, Jeanelle Booth has outlived most of her friends. "I don't know why the Lord is keeping me around," she says, "it must be to pray."

And pray she does. I, for one, have depended on her prayers for three decades. My mom and Jeanelle have been prayer partners during that time. We kids would get into trouble and they would pray us out of it.

Jeanelle has helped pray me into the ministry in the same way that she prayed for Dawson Trotman as the Navigators was founded several generations ago. She saw then not only the power of prayer, but the importance of one-to-one discipleship.

Over the years, Jeanelle has learned the importance of praying through an issue, focusing on it until God gives her the peace that she has finished praying.

I have been a beneficiary of her deep prayers. Who knows whether Navigators or Adventures in Missions would even exist without this little-known prayer warrior.

In some respects, we at Adventures aspire to live up to the example set by Trotman. If we have caught a vision for discipleship, it's in large part because of Jeanelle's prayers.

We all have unsung heroes in our lives – people who have called out the greatness in us and backed us up when we least deserved it. I'm blessed that Jeanelle Booth has daily been before the throne of the almighty asking him to smile on me and give me favor.

Who are your unsung heroes?

We pray for our own healing and health. It’s a good time to step up the prayer for the nation.&nb…
16 April 2020

What Is God Saying to Us?

What is God saying to us? Lots of people are asking that question these days. And the good news …
10 December 2014

Lord, I want to learn to live as Jesus lived. Teach me to leave the things behind that he left. …