Angels fought for me

Liz Ogletree is a member of our L squad. She told me the story of how she almost lost her life when she was in El Salvador and how God miraculously saved her. She was enjoying a day off with her friends at a waterfall called Chorros de la Calera. She saw her friends entering a dark tunnel ahe…
By Seth Barnes
21 January 2013, 12:01 am
By Seth Barnes
21 January 2013, 12:01 am 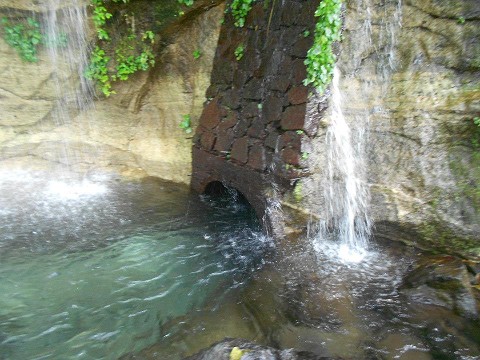 Liz Ogletree is a member of our L squad. She told me the story of how she almost lost her life when she was in El Salvador and how God miraculously saved her.

She was enjoying a day off with her friends at a waterfall called Chorros de la Calera. She saw her friends entering a dark tunnel ahead and decided to follow them, but followed the wrong channel and felt herself being swept away, unable to slow herself. The current swept her in complete darkness. Here’s the story in her own words.

I slammed into some kind of concrete wall. My nose was still under water. I couldn’t breathe. All I wanted to do was breathe.

My heart was pounding. I was choking on water. I flipped onto my back to float so I could breathe. Terror seized me. I began to yell. I screamed the names of the friends I thought were with me. No response.

Once I realized I was the only one in the tunnel, I knew it was a bad, bad situation. I realized I was apparently supposed to have turned somewhere and I didn’t. The pressure of the current was too strong for me to swim back.

I thought my only hope was praying for another waterfall ahead.

After a bit of a struggle, I saw a pinpoint of light in the distance.  I thanked God there was another waterfall and I couldn’t swim there fast enough.  I just wanted out.  Out of this nightmare.

As I swam up to the light, I realized it was not a waterfall; it was an iron grate about 20 ft above me that the sun was shining in.

In front of me was a metal wall. The tunnel had ended and I was trapped.  I felt like a victim in a horror movie.  I was scared. I began to cry. I realized it was probably my last day on earth.

I yelled. I yelled again “HELP ME. SOMEBODY HELP ME.” I knew I had no human help.  God was the only help I had.

I started praying out loud, “GOD I NEED YOU. GOD PLEASE BE HERE. GOD SHOW ME YOU ARE REAL.”

He said back “Liz, you know I am real. Don’t question me now.”

I started fighting the current and it pushed back at me.  I prayed again. I tried again. It pushed me back into the wall.

I prayed for help. I asked for strength and endurance.  I knew this was a long tunnel. I prayed for more crevices. I felt another crevice an arm’s length away.

I prayed aloud for strength and endurance as the current pushed against my body in the dark tunnel. After 15 or so minutes of finding crevices and pulling my body with God’s strength, I stopped to rest.  I just wanted to catch my breath.

My legs got swept out from under me and I found myself holding on by my fingers.  I was exhausted but I knew I had to fight. I was fighting for my life.

I prayed. I knew the reason we pray from the passage I read in Matthew right before the falls. We pray because our spirit is willing, but our flesh is weak.  My flesh was ready to give up.

My arms were shaking and I was exhausted. I felt like I was going nowhere. But my spirit wanted to fight.  My spirit knew God’s strength and goodness. My spirit knew that it wasn’t going to be the last day of my life.

So I continued there in that pitch black tunnel feeling my way around while begging God for direction.

For more than an hour I fought on like this.

I knew I was closing in on the waterfall. I started praising God and asking for more strength.

As I got closer I started yelling for help, but all I could hear was the rushing of the falls.  I knew God had given me the strength thus far; He could give me the strength to endure until the end.

I started fighting harder, pulling my body weight with my fingers faster and faster.

And then – I made it! I was exhausted spiritually and physically.

Once outside, I sat on the rocks, overcome. And when I caught my breath again, I told my friends the story. To have been able to pull myself along like that over what must have been at least 300 yards seemed impossible. I shook my head in wonder at how God had given me strength.

On the way home, God gave me a vision of what had happened. He showed me a picture – there I was, slowly pulling myself along in the darkness, but this time I saw in the vision that I wasn’t alone!

Now I could see that there were three angels with me. One was behind me pushing me. Another was in front pulling me. And in front of that angel, another wielding a sword was leading the way and fighting for me.

The vision overwhelmed me. I always knew God loved me. But at a point when my life hung in the balance, he sent his angels to fight for me and save me.

Having been given my life back, I know, I can never be the same.