Are some churches too cool? 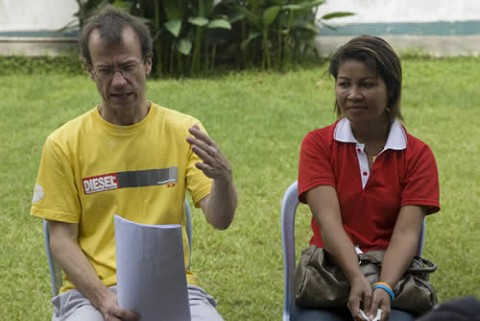 Jim Larson is a hero, pouring out his life as a missionary pulling young girls out of the sex trade in Bangkok. From my perspective, a guy like Jim has a credible platform to issue a critique of the church as he sees it. In this blog he takes on the cool factor in churches:

Over the last few years, churches have discovered coolness.

A pastor friend of mind likes to attend the cool church conferences
around the country–hip, branded events with names like Q, Echo,
Exponential and Orange.  Q–the ultimate coolness name–is happening
right now. I saw it on my friend’s Facebook page and looked at the
site.  Among the presentations this year are “Justice in the Suburbs”,
“Ensuring Social Entrepreneur Success” and “The Spirituality of the
Cell Phone”.

I am all for coolness in church.  I think Jesus was incredibly
cool.  It’s too bad that Clint Eastwood was never given a role playing
Jesus.  I can picture him, writing in the dirt, “Where’s the man?”,
then standing up with his back to the sun, calmly eyeing the blustering
Pharisees with rocks in hand for a few timeless seconds, spitting at a
beetle, then another pause, and finally monotoning a raspy “He who is
without sin, go ahead…”

But I’m not sure that the current focus on coolness is even close to
that of Jesus, because, at least as far as I can tell from my outside
vantage point, it seems more concerned with packaging Jesus in cool
ways than actually being like Jesus.  Jesus was cool because he was
simply genuine and unpretentious, whether letting a prostitute kiss his
feet or chasing temple merchants with a whip.  The current movement
seems more concerned mainly with interacting with cultural ideas and
forms, both affirming and critiquing.
To be sure, I see this as a huge
improvement over the church’s historical tendency to either criticize
or ignore most of culture outside of christendom (besides the Super
Bowl), or perhaps worse, to approve or reject cultural forms based on
nothing other than traditional taste.  When I was at Wheaton in the
70’s, secular classical musicians were hailed in concerts at Edman
Chapel while master guitarist Phil Keaggy was relegated to the gym.  In
that we’ve come a long way.

So churches are cooler now, but is it the right kind?  Is it getting
us any closer towards really making genuine disciples of all
nationalities, or is it in fact simply bringing our window dressing up
to date?  It’s one thing to be cool because it makes for good
marketing, and another because it’s simply who you are, single mindedly
focused on your mission. One must ask: if our focus were more on
directly being like Jesus than honing our packaging, may we not only be
far more cool, but far more effective?