Out of the utter horror of Haiti, comes a picture of incredible joy. Meet Kiki, Boy Wonder, alive and well after 8 days under the rubble of earthquake-blitzed Port au Prince. Can you see the joy in the eight-year-old’s eyes … he never gave up hope that he would be freed. The …
By Seth Barnes
22 January 2010, 12:01 am
By Seth Barnes
22 January 2010, 12:01 am 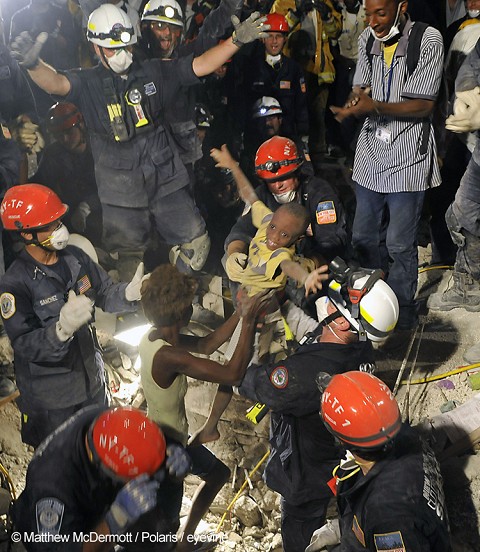 Out of the utter horror of Haiti, comes a picture of incredible joy.

Can you see the joy in the eight-year-old’s eyes … he never gave up hope that he would be freed.

The
rescue – and a picture that will bring tears to the eyes – defied the
myth that people only survive being trapped for a couple of days or so.

Kiki was saved after an incredible operation, in the Nazan district of the Haitan capital, mounted by US earthquake experts.

The
heroes and heroines were members of urban rescue squads from New York
and Virginia, some of whom had been involved in the 9/11 horrors of New
York in 2001.Kiki Joachin
smiled with delight with his arms outstretched as he was pulled out of
the wreckage of crumbled buildings in Port-au-Prince.

Kiki told the broadcaster he felt “happy” to be rescued and said he cried when he was reunited with his parents.

Asked how he managed to survive without food and water, he said: “God helped me.”
By Mark Bulstrode, Press Association, Eveningstar and [email protected]