Later Alessandro wrote me: “This is the map of my home and Villa Belvedere (which I know because I am used to run up and down the hills around Corrubbio.” His house was six minutes from where we lived! 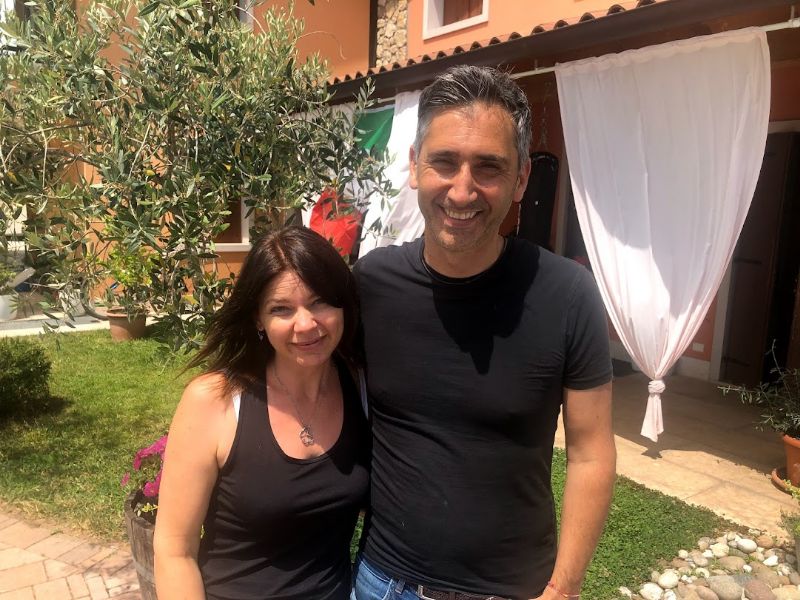 Alessandro & Christina
Last summer, Karen and I took a long-planned trip to Italy. We met Alessandro and his wife, Christina. They own a vineyard in the famous Valpolicella region. They invited us to join them for a special evening in their vineyard. We had such a good time with them and got to taste the wine they produced. They served a delicious meal al fresco. We didn’t want to leave!
We talked about the idea of partnering Beauty for Ashes with Alpha. Alessandro loved the idea. Later he scheduled a Zoom call with 60 of Alpha’s women leaders. They loved the idea. He contacted Father Rito in Sorrento and they prayed about doing a retreat there. Father Rito heard the Lord say, “Yes!” So, we decided to plan a couple retreats in November.
Last week they happened! One retreat was in Milan and the other was in Sorrento (half an hour from Positano and the Amalfi Coast at this retreat center). We limited attendance to 15 ladies per retreat. And the reports were awesome! One participant summarized it: “Being a part of a retreat was the treasure I was looking for.”
Another said, “I finally found the courage to share my story in total freedom and without judgement”
A third participant said, “I discovered that every woman has an important story to tell.”
What is especially exciting: These women were all already leaders in the Alpha movement. Most of them are now equipped to help lead a Beauty for Ashes retreat in their own home town!
Some of you reading this may need to consider going with us to help facilitate future retreats. If so, let me know!

Jesus went looking for fishermen. He looked for those who could translate their experie…
27 April 2017

What kind of story are you writing with your life? Is it one of great passions and struggles or i…
21 October 2014

God loves stories. He hardwired us to respond to them at a spiritual level – from our gut. “…