Birth of a radical Jesus-follower

A month or so ago, blog reader Justin Rhodes showed up on my radar screen. Here’s how he described his journey: “God saved us from ourselves about 3 years ago and since then we’ve found ourselves on a wild ride of self denial.” I loved the way he and his wife Rebekah have been trying to follow Je…
By Seth Barnes
19 January 2008, 12:01 am
By Seth Barnes
19 January 2008, 12:01 am

A month or so ago, blog reader Justin Rhodes showed up on my radar screen. Here’s how he described his journey: “God saved us from ourselves about 3 years ago and since then we’ve found ourselves on a wild ride of self denial.” I loved the way he and his wife Rebekah have been trying to follow Jesus in a radical way and asked him to share his story with you. Here it is: 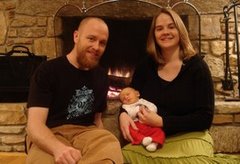 I said the salvation “prayer” a million
times, got baptized, did some good deeds and avoided most of the socially unacceptable
sins. I was like many people of the church today, “saved.”

As a teen I fell into continual sin and
doubt. My attitude grew to be, “if God exists, I hate Him”. My girlfriend (who
is now my wife) was still into the Sunday church thing so I went along with it
and kept quiet just in case she was right, I didn’t want to screw up her
eternity.

The birth
of a radical
In my mid 20’s I began to study Jesus with
an open mind, but what I found wasn’t easy. Jesus really meant it when he said
that He wants us to die to ourselves, live for Him and receive life.

Love, according to the Bible is laying down
one’s life for someone else. In a casual moment walking around a lake a friend
of mine challenged me to start a ministry and I accepted. It was at that moment
that I put what little head knowledge I had to work. James says “faith without
work was dead.” My faith was dead and useless until that point.

In search for love my wife and I found
ourselves as house parents at a children’s home. It’s there we found comfort in
ministering to the least and caring for the orphan.

Starting
a ministry
From there we set out to love through
adoption and foster care in our own house. After a series of events we ended up
spending months as missionaries at Orphanage Emmanuel in Honduras. In 2005 we
met a modern day apostle in the form of the late George Muller’s (1800’s) audio
biography. George had preached, distributed thousands of
Bibles, traveled for more than 15 yrs in foreign missions and housed thousands
of orphans. All of that without asking anyone for money or going into debt.

Scripture became a guide to life. With God’s
help we wiped out $40,000 of debt in 5 months and began to get rid of unneeded
possessions for the poor. That was just
the beginning of adventures found in interpreting and living out God’s Words
literally. If you look at how Jesus
lived and what he taught, it’s extremely radical. In fact, I don’t think you
can separate radicalism from true Christianity.

To love your neighbor as yourself, to love
your enemy, to pray for those that mistreat you, to turn the other cheek, to
store up treasures in heaven are just a few of many crazy, ridiculous, radical
commands Jesus wants us to obey. I was born again the moment I put His Words to
action.