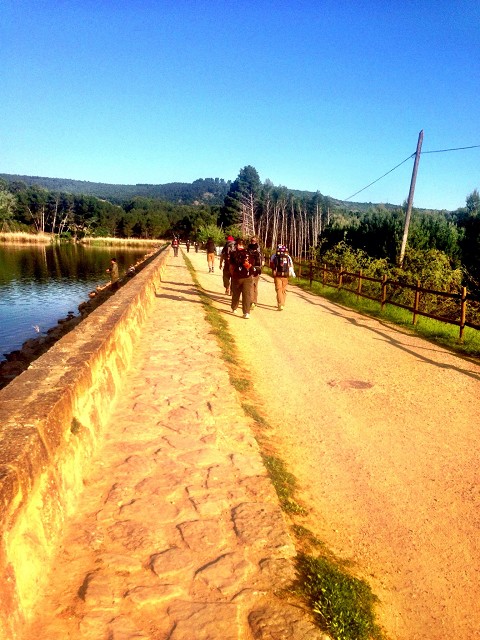 After seeing the movie "The Way," I sensed that a walk on the Camino might be in my future at some point in my life. There's something about it that has pulled pilgrims like a giant magnet down its 500 mile length.

It's been two weeks now that we've been hiking  the Way of St. James and I can tell you that I'm a fan. Over and over things about life on the Camino surprised and delighted me.

At first the 5:30 wakeups and dawn departures were a struggle, but then, there we were in the Spanish countryside as the sun rose over poppy-speckled fields of grain, medieval castles in the background.

The Camino propels you on. A 15-mile hike becomes normal. The daily rhythms simplify your life. When it's time to stop for a midmorning cafe con leche with a chocolate croissant, the world somehow looks as it should.

My hike was just two weeks, but we quickly assimilated Camino culture. At our first stop, there were a number of peregrinos sitting outside in the morning sun. We were warmly greeted by a group we'd already gotten to know.

There was Edward, the Russian who had been kicked out of the house by his wife who was tired of his wine drinking. He had a bottle of wine sitting on the table beside a cappuccino.

There was the couple who had only met on the Camino five days earlier, but now were in love.

Later we would meet Sylvia, the 31 year-old mother of three from Germany hiking with 19 year-old Albert from Venice and Fabio, a Franciscan friar who became an honorary member of our group and Mike, the venture capitalist. We'd meet the three South African women hiking together for fun and for spiritual purposes and dozens of others.

Everyone is on an equal footing while walking the Camino. Each has his or her own reasons for going. Each sleeps in the same common rooms along the way and each lives the simple life that the Camino requires of those who walk it.

Evening times can be a delight if someone has a guitar along and those gathered are able to sing.

The days inevitably hold surprises as you find yourself passing through quaint towns or passing locals who cheer you on with cries of "Buen Camino!"

Hiking the Camino is a life within a life. You live episodes everyday. The history of this pilgrimage may go back more than a millennium, but its culture is still evolving every day. And as we hike it, all who are peregrinos are also co-creators.

As I prepare to return home tomorrow, there is much from the Camino that I'm hoping to take back with me. I've fallen in love again with simplicity, community and grace. I return to people I love, but a lifestyle in America that has grown too rushed and complicated.

When I return, I'll be walking more. And as I do so, I hope to walk into a lifestyle that reminds me of this road I'm leaving. I need the grace.

I wish I could introduce you to the people I've met and to the lifestyle we've walked out together; I think you'd like it. Maybe one day you can join me on the Camino, and if not in Spain, then maybe on the road to greater grace.