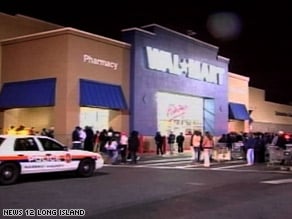 A Wal-Mart employee at this Long Island location was killed in a rush early Friday morning.

In the first, a temporary Wal-Mart employee was trampled to death in a rush of thousands of early morning shoppers as he and other employees attempted to unlock the doors of a Long Island, New York, store at 5 a.m., police said.

In the second, unrelated incident, two men were shot dead in a Toys “R” Us in Palm Desert, California, after they argued in the store, police said.

The toy company and authorities said the California shootings had nothing to do with shopping on Black Friday, which is historically one of the year’s busiest shopping days.

The Wal-Mart worker, whom authorities did not identify, was 34 and lived in Queens, said Nassau County police Detective Lt. Michael Fleming.

“This was utter chaos as these men tried to open the door this morning,” Fleming said.

Video showed as many as a dozen people knocked to the floor in the stampede of people trying to get into the Wal-Mart store, Fleming said.

The employee was “stepped on by hundreds of people” as other workers attempted to fight their way through the crowd, Fleming said.

“Several minutes” passed before others were able to clear space around the man and attempt to render aid. Police arrived, and “as they were giving first aid, those police officers were also jostled and pushed,” he said.

“Shoppers … were on a full-out run into the store,” he said.

The crowd had begun forming outside the store by 9 p.m. Thursday, Fleming said. By 5 a.m. Friday, when the doors were unlocked, there were 2,000 or so shoppers, many of whom “surged forward,” breaking the doors, he said.

The man was taken by ambulance to a hospital, where he was pronounced dead.

Others in the crowd sustained minor injuries such as sprained ankles, Fleming said.