Crossing over into a tragic land 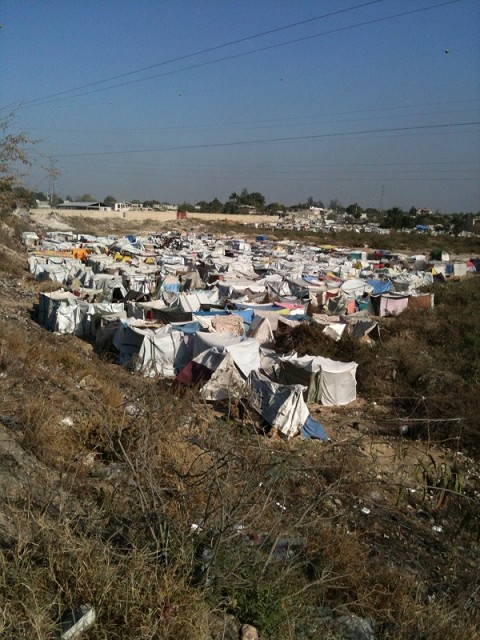 And I’m trying to take it in. How am I to feel?

I suppose I might feel like I did in the winter of 1980 as we
prepared to cross the Thai border into Cambodia. A great human tragedy
was unfolding in real time. Two million Cambodians had died or were in
the process of dying. We put 225 live, clucking chickens into a pickup
truck and crossed over to give them food. They were the survivors, the
lucky ones.

Driving across the border into Haiti, my heart will probably beat
as it did as a 22 year-old. But what will I see and what will I feel?
Families without homes or tents are huddled under sheets. A million
orphans, refugees and amputees are reeling, still in shock. Disease is
springing up in the fetid camps.
Will I notice? Will I notice:

The young girl whose mother, father, and siblings are gone?
The school-turned-graveyard that collapsed on the students?
The mother whose three-year-old’s leg was amputated at the hip?
The soldier whose uniform is all he has left?

Just how many details in plain sight will I miss as I navigate
through a world in chaos? Me just trying to get from one place to
another, trying to find the interpreter who is late, buying supplies,
wondering if the pastors will show up? Will I slow down enough to feel
the ache welling up from the ground, will I sense the emotional
tectonic plates shifting in the air? Will I sense God’s heart, still
breaking for a people so inured to tragedy that even this cataclysm
goes un-mourned?
I received an email that said, “There is a desperate need for
crayons, paper and things for the children to be able to express
themselves in the midst of all of this mess.” Crayons, people!
For the love of God, there is a desperate need for crayons!? What do
you feel in a land like that? Where does your soul retreat for oxygen?
The same email said, to bring “masks for all of the volunteers
because of the dust and the smell of dead bodies.” And I wonder what it
will do to me and what I will do in response. What will I feel?
When we first prayed for Haiti the Sunday after the earthquake, I felt nothing.
Haiti is a nation I’ve studiously avoided over the years. Its
bureaucratic impossibilities frustrate me. Its intractable poverty is a
thumb in the eye of a kingdom predicated on a theology of abundance.
And for me, January 12, 2010 was another national catastrophe on the
heels of Katrina, the Tsunami, and Swaziland. I was emotionally cool as
we commenced praying.
But on that Sunday as we prayed, God gave me a gift I didn’t want
– he showed me how to feel. As my spirit reached up to connect with
God, his feelings began to flow down, into, and through me. First in a
trickle, a tear, something not from inside, but from him that began to
cascade down and rip at my soul. And soon, it was an out-of-control
surprise for me, a non-feeler, the stalwart in the crowd.
I don’t even know any Haitians! I’ve only been there once, and I
had no intentions of going back. But on that Sunday, he began to empty
his heart, his great, breaking heart, for that tragic land and its
people into me. Then, sobs began to rack my body. I gasped for breath.
It wouldn’t let loose. It convulsed me. I was beyond embarrassment or
saving face. And I was laid bare by his divine, molten love for the
people of Haiti,
Thankfully, nobody made a big deal about this man crumpled on the
floor, heaving with unnamed grief as the prayers continued. Eventually
a measure of control returned. Blowing my nose, I welcomed the return
of my senses. But for minutes after, his heart seemed to convulse
inside me like aftershocks.
It’s not a place I want to return to. It’s not a place you’d
naturally love. And I don’t know how I’ll feel tomorrow. But for one
day at least, I understood something of what God feels about Haiti and
its suffering people.