The sacred yes (see my earlier blogs), though essential for adults, should begin to be built into a young person’s spirit early in life. By defining the first part of life as an age of setting limits, I’m not saying you shouldn’t simultaneously encourage a young person to dream. My poi…
By Seth Barnes
05 February 2007, 12:02 am
By Seth Barnes
05 February 2007, 12:02 am 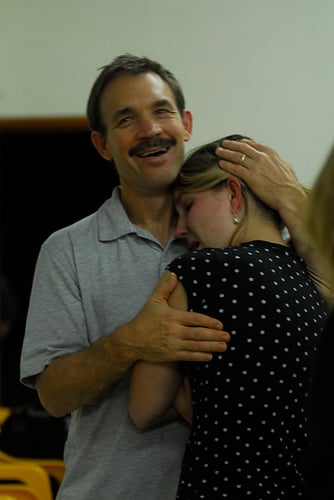 sacred yes (see
my earlier
blogs), though essential for adults, should begin to be built into a young
person’s spirit early in life. By
defining the first part of life as an age of setting limits, I’m not saying you
shouldn’t simultaneously encourage a young person to dream. My point is, if the ego isn’t restrained and
humility and self-control learned, the false self will run amok. A personal Copernican revolution needs to
occur so that the individual does not place themselves at the center of the
universe.

Bill Wilkie wrote me the following email on the

sacred yes and the

sacred no which adds some helpful nuance to the discussion.

“I have a six year old granddaughter who verbalized her
passion for horses at age three. She still needs the structure of NO, but
she really thrives under the YES associated with her passion: visits to the
local barn with 50 horses where she is allowed to go into the corral when she
visits grandpa; riding lessons at age five when they normally start lessons at
8; visits this next summer for four weeks to her other grandfather’s ranch in
Oklahoma (with a small herd of 15 paint horses) to learn riding and leather
work to make a saddle; learning the scientific parts of a horse, etc.

Christmas and birthday gifts are horse-related. We
talk about careers.

She has been told and knows that she can change her passion
at any time. She and her brother who is five can carry on a conversation
withan adult and will often ask them what their passion is. The
adult looks askance and often out of embarrassment asks, “Well what is
your passion?” The child knows and can talk about it.

My grandson is five and his passion is airplanes. More
specifically, Blue Angels. He looks at DVD’s that are not just stories
but histories or analyses of airplanes. On the way to school this week,
his sister was talking about learning to train horses from her
grandfather. Garrett chimed in that he was going to train other people
how to fly.

I don’t know where that came from but he will take lessons
as soon as his feet can touch the controls, he will be a pilot at 14, and if he
sustains this interest, he will be an instructor at 18 and earn his way through
college at $30/hour rather than minimum wage. He will leave college with
no debt and he will pay for his entire education. We may invest some
money in his school for him to develop a skill like flying instructor that will
empower him.

Now, to the question of saying NO to adult children. I
believe that if you say YES often enough (and we just went through this with my
son), you can earn the right to speak into their lives and say NO by indicating
that you disagree with reasons with some action they are contemplating.
But you have to be in a relationship driven by saying YES that positions you to
have access early in the decision process. You cannot say NO after the
fact. It does not work.”