We took off from the Phnom Penh airport and as I write this we’re on a Korean Air 747 somewhere over the north Pacific. We spent four intense days debriefing our 32 member World Race squad. Last month they’d been in Viet Nam, living on the top two floors of a hotel-brothel, a great vantage point …
By Seth Barnes
07 October 2008, 12:10 am
By Seth Barnes
07 October 2008, 12:10 am 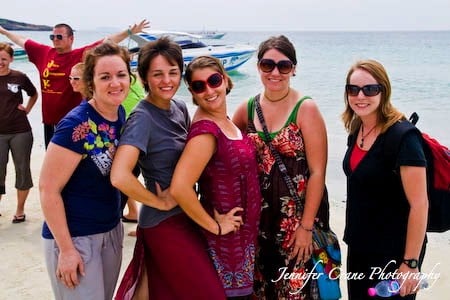 We took off from the Phnom Penh airport and as I write this we’re on a Korean Air 747 somewhere over the north Pacific. We spent four intense days debriefing our 32 member World Race squad. Last month they’d been in Viet Nam, living on the top two floors of a hotel-brothel, a great vantage point from which to pass out roses to prostitutes as a way of saying “God loves you.” They prayed a lot while they were there and their schedule seemed to fill to overflowing with ministry to university students and to special needs babies.

They’d liberally poured out their compassion, but compassion needs the breathing space of a debrief or it becomes fatigued.  So they headed for Cambodia’s beaches where, as their coaches, Karen and I had the job of speaking life to them.

We met with their small teams of six.  One of the teams was experiencing something of a crisis. Whereas they’d seemed too perfect before, they were struggling this time and their situation resisted a quick fix.

We met one-on-one with team members. If you read some of their blogs (from Lindsay, Kira, Josh, Pamela for starters), you can get a more specific sense for the kinds of issues they wrestle with. Tough stuff, life-changing stuff, and sometimes a surrogate mom or dad can help them sort through it all.

One morning as I was running on the beach, I heard the Lord say, “Rent a boat and go explore the nearby islands with Josh.”  So I found a boat for $30, grabbed Josh, and we had a blast snorkeling and exploring the beaches of Bamboo Island. I don’t often get that kind of personal time with a racer, so this was a gift.

The next day we repeated the excursion with the whole squad.  I had a vision for grilling a barracuda on the beach.  We bought a huge one for cheap and had a great adventure.  The whole thing cost less than if we’d taken them out for hamburgers at McDonalds.

As the boat chugged along, we talked about their dreams and how much God delights in making them happen. And on the four-hour bus ride back to the capital, we told jokes and stories.  When the bus pulled over to drop us at the airport, we told them we loved them, and they said the same.

If many had arrived tired from Viet Nam, it seemed the light had returned to their eyes. We left them ready to take on the next set of challenges and heartbreaks. It’s a great ministry for empty nesters like us who love to disciple.