Deliverance in the house of the dead

If you’re a regular blog reader, you’ll recall the story I shared a couple of weeks ago from the earthquake zone in Peru. Our team went into this lady’s home to pray for her and just as we did so, she died. Unwittingly, we were caught in a drama that has amazed us. It began as we helped her s…
By Seth Barnes
26 January 2008, 12:01 am
By Seth Barnes
26 January 2008, 12:01 am

If you’re a regular blog reader, you’ll recall the story
I shared a couple of weeks ago from the earthquake zone in Peru. Our
team went into this lady’s home to pray for her and just as we did so,
she died. Unwittingly, we were caught in a drama that has amazed us. It
began as we helped her sister Daisy and the rest of the family to
grieve. 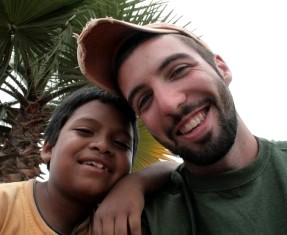 Yesterday the team returned to Daisy’s home. As Paul Harvey would say,
here’s the rest of the story – as reported by team member Matt Snyder:

Nate
shared the story of Lazarus from John 11 with Daisy and talked with her about a
relationship with Jesus. She was upset
with the Lord for taking away her sister and leaving her nieces and nephews behind
without a mother. Daisy wasn’t ready to
forgive. Her cries echoed with Martha’s
who said to Jesus, “If you had been here, my brother would not have died” (Jn.
11.21). Nate asked Daisy if we could pray for her.

She ended up sharing with us that her throat hurt a lot from
bronchitis and she wasn’t able to talk much, that there was a deep sadness in
her heart, and that every time she closed her eyes she saw a beast.
What?

That kind of threw me for a loop. Us boys and Dina kind of looked at each other
surprised but knew we shouldn’t have expectations that this couldn’t happen. We surrounded Daisy, knowing that we had to
pray this out of her – Robby felt very strongly that we needed to do something
about this as did I. He shared with
Daisy a story from when he was a teenager and had a similar experience. I definitely believe that the Lord used that
to soften Daisy’s heart. Knowing
full-well about what we were going to do, we laid our hands on her, looked at
each other with fear and faith, and began praying.

We spoke boldly, loudly,
and with authority and power. We were
filled. Nate was vibrating with the Spirit
courageously proclaiming freedom for this captive. Kelton and Robby were no different than Nate. Dina translated certain phrases for us and
remained in prayer for the situation as well.

Robby was facing Daisy.
He stared wide-eyed at her the whole time and watched her eyes flutter
like crazy. We all saw her head shaking
side-to-side. We prayed for about a half
hour. Finally the resistance stopped – she
saw Light. She opened her eyes and began
praising God through the pain of her bronchitis. Wanting her to freely praise God, through the
power of the Almighty we cast that sickness out of her. 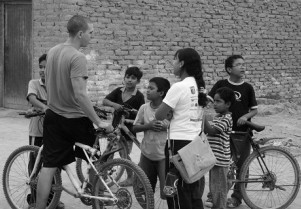 Darkness was defeated with five pillars of Light that
day. And we were humbled and could only
marvel at what the Lord had ordained us for.

And if I was going to be honest, I’m still not sure what I’m
supposed to think about what happened.
Sometimes I think it’s okay to not fully understand the extent of what occurred. Occasionally – in fact most days – the
outrageousness of grace is going to go further than we can, further than what
our feeble minds can be stretched to.

I know that this experience was a much needed thing for my
own personal walk with Christ. I’ll be
the first to admit that I have had doubts that things like this could
happen. I can only think of the
countless times that I’ve read through the gospels, through Acts, or other
stories about things like this birthing itself into existence – about the
Kingdom being unlocked and spilling forth with an incredible Light, with
heart-wrenching speed that it drowns others in its splendor.

This is just the beginning.