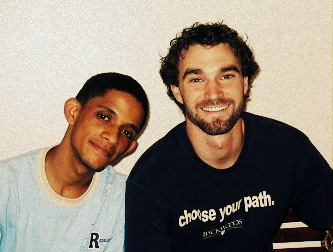 In 2002, I took Miguel Santiago on a one-month trip to Peru. I taught him to disciple and plant churches. I applied 2 Timothy 2:2, “The things you have heard me say in the presence of many witnesses entrust to reliable people who will also be qualified to teach others.“

Miguel’s dream was to reach the people of the Dominican Republic. We talked about how he could prepare to do that.

I said, “You need more training. Would you be open to moving to Mexico so that we could train you?”

So he moved to Mexico. That’s where he met, Kristina, who became his wife. We discipled them for two years. Next he moved to the DR. There he met Ronnie and invested in him in the same way Miguel had seen me invest in him. Here’s that story:

Ronnie Herrera grew up in a broken home.

“When I was eight, our family was going through a very tough financial situation, and my dad decided to find a better way of living. That’s when he moved to the United States. From there on, me and my two brothers grew up with my mom, and she raised the three of us by herself.

Over the next few years, Ronnie’s family faced more hard times. They lost everything to Hurricane George, then his father developed a blood clot in his brain from the stress of their financial situation.

Soon after, Ronnie began attending a Christian school and accepted Christ. He went on his first mission trip with the church youth group, and he discovered a passion for sharing the hope he found in Jesus.

“My friend and I knew we needed someone to teach us what it meant to be missionaries. We thought of an American missionary couple we knew of, so we knocked on their door and asked them to disciple us.”

That door belonged to Miguel. Miguel and his wife Kristina had been praying for months for God to send them young people to disciple.

“Miguel began to disciple me. It was very task-oriented at the beginning, but after a while our relationship became more personal. Miguel became like a father to me, and I was a son to him. I admired him as a man, as a husband, as a father.

“My dad had five children with three different women. He hasn’t spent time with any of us in a way a father would. I understood that wasn’t what I wanted for my family.

“I saw I needed a man — I needed a father — to show me how to be a father. I saw my need, and I saw that Miguel could be a good father to me and teach me to be a son.”

Over the next few years Miguel mentored Ronnie, and Ronnie’s faith grew strong under his guidance.

“He helped me grow from being a child in Christ to a man of God. To go from knowledge to spiritual maturity.”

Then, during a trip to Haiti and Peru, God told Ronnie it was time to start teaching others what he was learning. He returned to the DR and began mentoring a group of young men.

This group of young Dominicans has spent several years investing in the people of the village of Cativo. They lead worship services, teach the adults to read and write, cook meals for the village, host Vacation Bible School, and disciple individual believers. They pour their lives into the people of Cativo every day.

This ministry has grown and sparked a passion in the Cativo believers to disciple another village the same way Ronnie’s team ministers to them. That village disciples yet another.

Many of the Dominican disciples are young people choosing to give up future plans to follow God’s call.