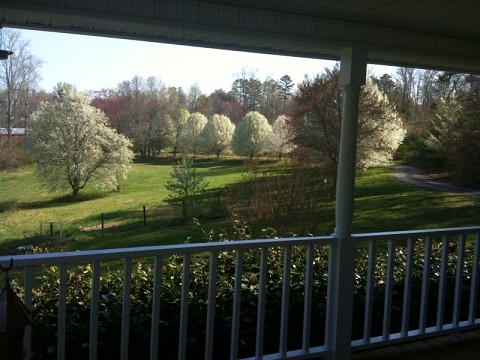 It was the spring of 1994. We had sensed God telling us to move out of south Florida. Didn’t have any idea where he wanted us to move, but we knew he wanted us to step out in faith. So we put our house on the market.
We were nervous – would it sell? Or what if it sold and we had to leave right away, where would we move? We didn’t even have a town in mind.
Some people came to check out our home. Then our fears were realized – a few weeks went by and one couple loved it. They’d buy it immediately if we could move out.
Yikes! What to do? Karen and I and our five children would be homeless. We prayed and, feeling like God wanted us to keep walking in faith, we agreed to their terms.
Now the reality of our situation hit Karen and I: We would have to leave and go somewhere with all of our kids and furniture in just a few short weeks. As we prayed, we thought God might be directing us to move near Atlanta, but still didn’t know what town. We liked Gainesville, but then Rome or Athens (Georgia, not Europe) had their attractions as well.
We’d already looked around Gainesville, but couldn’t find what we were looking for. Our budget was tight and we felt like building on some land would be the best option.
A week went by, then two weeks. With all these question marks and the clock ticking down, Karen was starting to get antsy. One night as we were going to bed she said, “We really need God to show us what to do. How about if we pray that he gives us a dream?”
“Great idea,” I replied. “I’ll pray that God gives you the dream tonight.”
“No, you’re the leader of the family, I’m praying that God gives you the dream tonight.” So, saying, Karen prayed and we both went to sleep.
About 6 a.m. the following morning I woke up from a dream, “Karen, wake up, I just had the dream!”
“What are you talking about?” She muttered from under the pillow.
“The dream you prayed for – I had it! There was a guy named Tom that we bought the property from and a big tower behind the house.”
Who knew if the dream was legit or not – I was just glad I had it. I wrote out the details of the dream in my journal and kept living my life.
A week later, through a series of miracles, I found exactly the right property in Gainesville. But I was on a quick visit and didn’t have time to meet with the owner and so, had to return to Florida without making an offer. The next week, we loaded up the U-haul and drove back. I parked the truck out of sight and negotiated with the owner and he accepted our price.
The funny thing is, in all the commotion, I completely forgot about the dream.
Years later, I was reading my journal and bam! I connected the dots – we had in fact bought the property from a guy named Tom! And what about the tower? Though there wasn’t one at the time, years after our move, the telephone company built a huge tower near an adjoining property.
Pretty wild, huh? You can draw your own conclusions about God giving us prophetic dreams or not, but after experiencing that, it’s a settled issue for the Barnes family.
I don’t know why people struggle and think only flaky people say they have dreams from God. We see prophetic dreams scattered throughout the Bible. Jacob saw a ladder. Peter saw a table cloth. Paul saw a man from Macedonia. This site estimates that a third of what we read in the Bible relates to a vision or a dream. God promises us in the book of Acts that in the last days, we’ll dream dreams and see visions. It’s supposed to be normal for people who follow Jesus.
So many people I know have had their lives impacted by dreams from God. And yes, some of them are flaky. So here’s where I come out on the subject: My guess about the people who don’t believe God speaks through dreams is this: It’s not that he isn’t speaking, but just that they aren’t listening.
We have to pay attention to our dreams. Sometimes we have to go looking for them as Karen and I did.
Have you had a dream from God that impacted your life? Do you think he still speaks that way?