Dodging bullets for the gospel in Matamoros

AIM has had a ministry based out Matamoros, Mexico for almost 20 years. During that time, our leaders have been friends with a woman named Manuela, the sister of the notorious Tony Tormenta. Tormenta headed a drug cartel until he was killed a few weeks ago in one of the gun battles ripping the bo…
By Seth Barnes
23 November 2010, 12:11 am
By Seth Barnes
23 November 2010, 12:11 am

AIM has had a ministry based out Matamoros, Mexico for almost 20 years. During that time, our leaders have been friends with a woman named Manuela, the sister of the notorious Tony Tormenta. Tormenta headed a drug cartel until he was killed a few weeks ago in one of the gun battles ripping the border region apart. 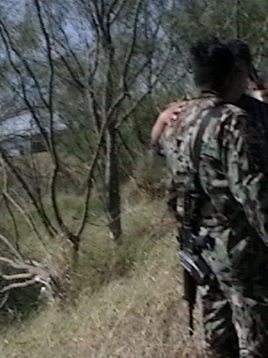 Her brother’s notoriety exacted a terrible price on Manuela. Earlier this year, in an act of revenge against her brother, a rival gang kidnapped her daughter and killed her.
The good news is that the church in Matamoros has responded to all the violence with courage. Knowing that Manuela is a believer, the city pastors and leaders gathered in the restaurant she owns to pray for her. Unbeknownst to her, that same day her brother was in a gun battle nearby and died.
Several of our team members were caught in the middle of the shootout. Seeing the bravery of the Mexican marines, they felt led to do something to encourage them and decided to cook them a hot meal.
Our leader said, “The marines seemed surprised that  our group had come to serve them the delicious food. The Lieutenant said, ‘No one has come and bring us hot food. We are so grateful to you for coming, and show us compassion and care for us.’
“Each one in our team talked to them. We shared our hearts of gratitude to them for protecting us, our families and the community. We also talked about our assurance in Jesus. We gave to each one of them a New Testament, and asked the Lieutenant if we could pray with them. He was happy to let us pray.”
As the team was leaving, one of the marines, Joaquin, followed our team leader and said, “I want to personally thank you, I am moved.” He looked at her with tears in his eyes.
She responded, “We come to you in the Name of Jesus, he loves you.  Do you know him personally?”
He replied “My sister and mother are Christians, and have been praying for me for years. In fact, my sister wrote me today and told me again.”
“Isn’t it amazing that God sent us to talk to you about his love to you?” She asked. Later she asked him if was ready to make him Lord of his life.
With tears in his eyes, Joaquin replied, “I am more than ready, can you pray with me?”
For many, the future is bleak on the Mexican border. We may have to shut down our short-term missions base in Matamoros and we won’t be taking many teams this year. But we won’t be stopping our ministry. It’s needed now more than ever. In the midst of the world’s chaos and danger, it has always been Jesus’ followers who shine the brightest.