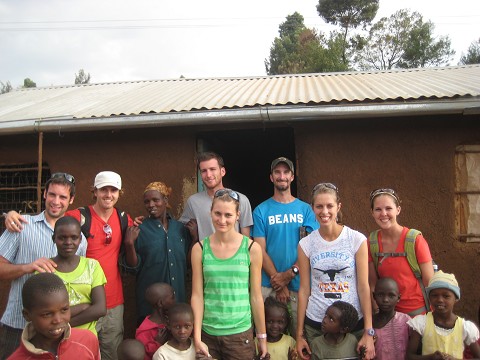 which was very obvious just from her facial expressions and the difficulty with moving her leg. After praying for her, she was able to walk, stand, squat, sleep at night, and was full of smiles. She re-committed her life to Christ and attended church the day Jesus healed her. We were able to visit her again a couple days after the healing to pray with her again and exhort her!

Alfonse, was from the Kibera slum. We ended up talking to him for an hour and a half about his faith, his past, his work history, and his family. He explained that nine months ago he injured his eye while digging through the trash. A thorn went in his right eye and completely took away his sight in that eye. As soon as I heard this, I knew we couldn’t leave this man without praying for his eye to be healed. With Alfonse’s permission, we placed our hands on his right eye and prayed for healing.

At first my prayers were timid, but God kept speaking the word “boldness” into me. So I not only prayed for healing, but commanded healing in Jesus’ name. After Jenny and I prayed, we removed our hands from his eye and asked about its condition. He said he could see beams of light for the first time in nine months. Jenny and I looked at each other and immediately knew we should keep praying.

Pastor Ezekiel, our ministry contact for the month, was walking with our teammate Michelle nearby, so we called them over to pray with us. Again, we laid hands on his eye and declared healing in the name of Jesus. Alfonse said he could still see the beams of light, and they had gotten a little brighter. At this point, Pastor Ezekiel and Michelle left to keep evangelizing. Jenny and I were still not satisfied. We wanted to pray a third time. Once again, we laid hands on his eye and commanded healing in the name of Jesus. As we were praying, I heard God say, “It is done.” When Alfonse opened his eyes, he said he could make out shadows this time. I told him that I was 100% sure God would fully heal him in the near future. I explained to him that my stomach wasn’t fully healed until I had complete faith that God could and that God would heal me. He agreed that God was going to heal him. We told him we would keep praying and he said he was going to keep praying to be fully healed. He wrote down our email addresses and promised to email us immediately after he was healed…..

Here is Amy’s next blog post:
If you read my most recent blog, you know that I’ve been eagerly awaiting an email from Alfonse. This morning one of the pastors approached me and handed me a small note. The top of the note said, “Alfonse!” and below his name was a phone number. Alfonse had walked to the church and told the church guard to pass on the following message to Jenny and I… He woke up this morning able to fully see out of his once blind eye! When I heard this, all I could was scream in pure JOY. Tears filled my eyes.

Goosebumps covered my skin. I danced around the church and shouted praises to God, completely in AWE of His goodness… of His faithfulness. Three days ago, as we were praying for Alfonse to be healed, God had said, “It is done.”
All it took was three days for us to SEE that it really was done.
So as I think back to these amazing testimonies, I can help but answer the question of whether or not God still heals with a huge “YES!” and that gives me faith that God can heal my friend Maureen. We prayed for her for quite sometime and eventually had to leave. At the time we left her, she told our translator that she was feeling hardly any pain and she could rotate her wrist!!!!
It is still a little swollen and causing her some pain, but we are continuing to pray for her and we are trusting that God will give her complete healing. I know that there are times that healing doesn’t come- but those times should not shake our faith in our God as a powerful and awesome Healer. And then there are those times when God does heal and we can give testimony yet again that we serve an awesome and powerful God!!!