Does Jesus still raise the dead? 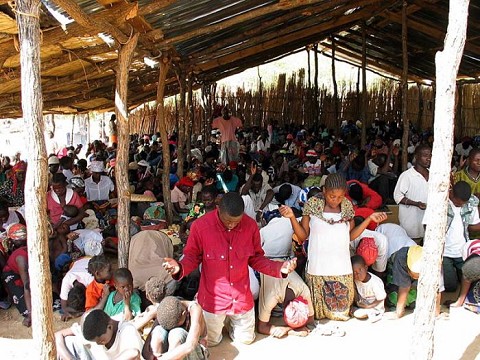 When I minister in Mozambique, I often teach at a college for pastors.  These men and women are some of the poorest in the world, and they literally arrive at our school barefoot and with nothing more than the clothes on their backs.  Their pockets may be empty, but their hearts are full and rich.
Thus, when we tell them that Jesus says ‘Greater works than these you shall do,’ they swallow it whole.  When we tell them that as we approach the end (regardless of whenever that shall be, we are approaching!), they can expect an increase in resurrection power displayed, they believe us.   Better than that, they believe God!  So, when we encourage them to pray for any dead people they come across, they don’t look at us with a ‘You’re bonkers!’ set of eyes.  Instead, I see eyes of faith.

Since Mozambique is considered one of the poorest countries in the world, it’s not surprising that Pastor Rago came across a dead person. Death is a much more common occurrence in this country than ours.  In fact, I think the average age the people reach there is 45.  One half of the children die before they reach five years of age.

So, when Pastor Rago came across dead Rosa, he obediently began to pray.  Again, this is not surprising to hear.   But where I lose contact, is when Pastor Rago continues to pray because Rosa is remaining dead.  You see, if I pray for a dead person who doesn’t have the courtesy to respond, you won’t get much more than ten minutes out of me.  I’ll simply decide, “God just must not want to do this today, but at least I tried.  ‘A’ for effort.”

And guess who changed?  It was not Rago, but Rosa.  The woman resurrected!

Do you understand why I like to hang out with African believers?!  Three days the man prayed! I would have been pushing at ten minutes with a corpse under my hands.

I love being around people who are more on fire than me, because if I get close enough, they’re contagious.  If you have a hard time believing this miracle in a distant land, that doesn’t bother me.  For I know beyond doubt, if you ever met Pastor Rago, you would not question.  In fact, you wouldn’t even need to meet Rosa, or the entire village of people who all became Christians.  (Of course, you could if you so desired, for they are all very much alive and well.)

You, like me, would probably have your breath taken away when you heard Pastor Rago pray.  You see, Mozambican pastors know how to pray like no others.  But Pastor Rago goes beyond the extraordinary.  You can’t help but be lifted to another realm when you hear this man pray.  And you can’t help but believe that this man has encountered God in a way you and I are now hungering for.  We too can know Him in His resurrection power, as long as we are willing to share in His sufferings.