Dogs Teaching Humans How to Live 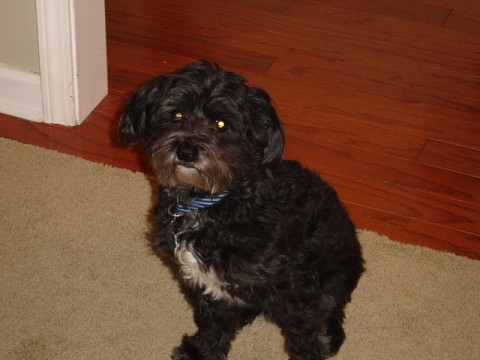 Yesterday my dog died. Eight years ago, I wrote this post about him, which I’m re-posting below. You can learn a lot about life from a dog.

People are a lot like dogs. You always think about that in terms of dogs and their masters – the saggy jowled guy who looks like Winston Churchill owns a bulldog and so on.

But recently I discovered another similarity by watching my own dog, Whimsy.

Whimsy has always been a lap dog. Just 15 pounds of fluff, he knows his spot in the world, and it’s on my lap. When I stay home to work, he comes and stares at me with a baleful shaggy face until I give him the OK sign and then he parks himself there for the day.

Whimsy is a bundle of love, but he’s got one bad habit; when we let him out and turn our backs, he’s off like a shot into the forest behind our house. In four years at the Barnes house, we’ve never been able to discipline him out of it.

It can be disconcerting to have one so small and relatively defenseless at large in the deep woods. We just attributed it to a character flaw in our little lap dog.

This past week, I had a revelation about this problem. Desperate for running partners, I decided to try ol’ Whimsy out. He loves to go on walks and danced all around the leash as I got it out. Hooked up, we went outside and I began to trot.

Much to my consternation, Whimsy shot ahead the full length of the retractable leash and strained like a hound after a fox. I picked up the pace, wondering where this would lead.

Whimsy just kept galloping ahead, running headlong up our driveway and down the street. One mile went by and he was still flying. Two miles and he was still a blur. Other dogs looked on in wonder as this mass of fur sped along, tugging me behind him.

We ran three miles and on the last quarter mile, I unfastened the leash and we raced down the driveway.

My revelation is that Whimsy may be a good lap dog, but down deep he’s a running dog. That’s why he runs away – he may not be built for speed, but he loves to run.

And here’s my point: A lot of us are living the lives of lap dogs. But down deep, we’re sprinters, built to run. We just never discovered that about ourselves. We got in the habit of being underchallenged and never discovered our true identity.

It’s not too late for you. Do something crazy. Start running somewhere.

*** For an ongoing account of people throwing off their lap dog identity and running around the world, log on to http://www.theworldrace.org/