Down in the dumps 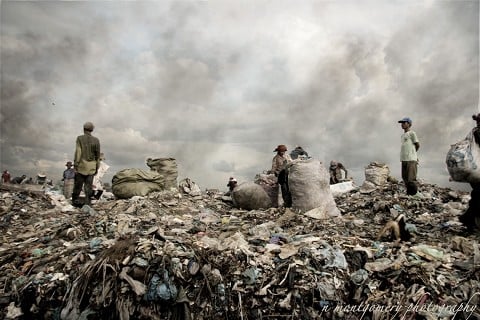 I went to the dump in Granada, Nicaragua for the first time in two years today. As my team and I exited the vehicle, flies, stench, heat and smoke accosted us in ways they’d never experienced.
I made it to the top of the hill before looking back and realizing the others hadn’t left their place next to the truck. They hadn’t ever seen anything like this before and immediately drew their shirts over their noses and took dozens of pictures.

After about thirty minutes of dealing with the initial shock, we walked into the trash heaps and spoke with the workers. Among them were buzzards, dogs and a single cow. A couple of guys on my team and I found a little girl and started asking her questions.

She’d been working there for a year, but has only two years left.

She goes to school at night and works at the dump during the day.

She works there with her parents.

She wants to be a cook when she grows up.

Her name is Maricela.

There were about twenty other children working in the dump with her. Some as young as seven years old. They haven’t been working there long enough to realize they probably won’t grow up to be a fireman, teacher or cook. Like their parents, this will probably be their life.

At Kingdom Dreams, we help launch people into their dreams. It’s completely heartbreaking to see dreams die in the trash heaps of Granada.

I left thinking that someone should pay special attention to these kids’ dreams. Maybe one of the kids on this mission trip. Perhaps one day I will.