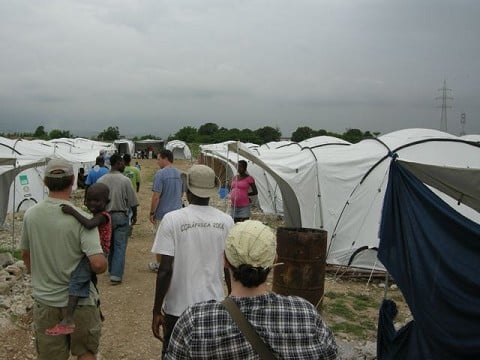 The rain began to fall soon after we arrived at Marassa, a tent city on the outskirts of Port-au-Prince. We were talking to the community leaders we first met in February.
In those days the thousand or so families of Marassa had neither food nor water. They were treating the sick and wounded at a makeshift clinic.
As the storm clouds drew nearer, someone pointed to a shelter – a good place to get out of the rain.
And as we walked there, a small boy in a raggedy red shirt ran up and grabbed my hand. I hoisted him up to my hip and began to carry him along.
“His name is Beethoven,” said Geftay, translating for me. “He is five years-old.”
We arrived at the shelter as the storm beat down on the tin roof. Someone got chairs for us. Before long Beethoven was asleep on my lap.
“How are you?” We asked the ten or so leaders who’d gathered. 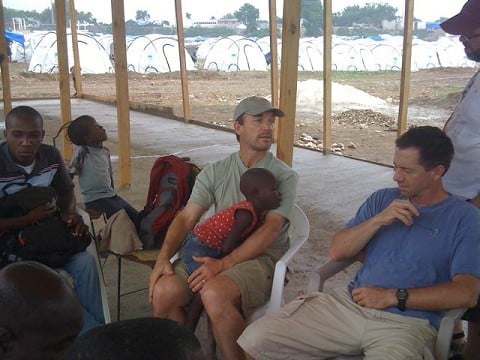 “We don’t have jobs, but many of us have tents now. We have some common toilets. Often we are hungry, but we are alive.”
“How did you decide who would get the tents?”
“We gave them to those who were neediest – mothers of small children and the sick.”
The conversation turned to jobs. There aren’t many left in Haiti. So many businesses have been destroyed along with much of the nation’s infrastructure. One lady had a warehouse that had collapsed. Another used to have an export-import business, but none of her customers have money.
So we brainstormed and dreampt for a while. Construction work is minimal because so many buildings have collapsed into rubble. What if you were to form not a construction business, but a destruction business? Offer to tear down and remove the rubble from buildings in exchange for a 10% share of the title of the underlying property. You could match up an economic need with a ready labor pool. My idea was hard to understand, so we moved on to something simpler. 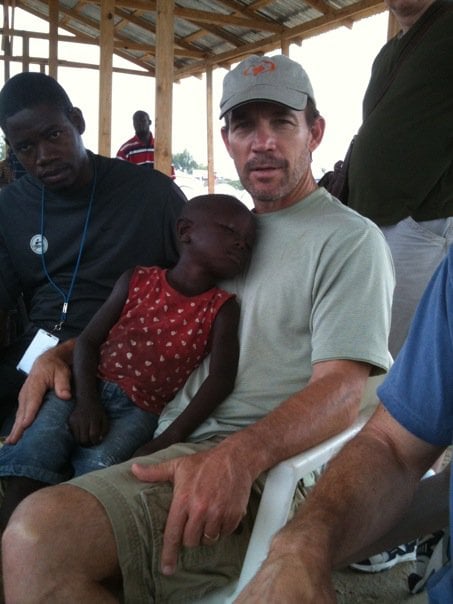 We talked about the chicken and pig raising businesses I’d run in Thailand in 1980. What if we were to loan them enough money to start a small poultry farm?
We moved on to their spiritual needs: what about a church, would they like one? And would they like for us to pray for them?
They answered yes and we prayed for their businesses, for their children, for their dreams.
After three hours, the rain let up enough. We gave them the sandwiches we were going to eat for lunch. Beethoven woke up to eat one, but never left my lap.
Leaving for the base, we wound our way through the garbage, ruins, and teaming crowds of the commercial center. We crawled along in the crazy traffic for two hours before coming home to a warm meal, still processing what we’d do if we lived in Marassa. And for all our brainstorming, I’m not sure any of us know.