Did you see this story today? This was great. This guy was a Jesus-follower on death row. The prison officials wouldn’t carry out his request of giving his final meal of a pizza to the homeless. But that wasn’t the end of the story… 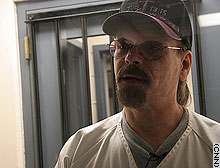 (CNN) — Hundreds of homeless people in Nashville, Tennessee, ate
well Wednesday evening — all in the name of a man who the state put to
death just hours earlier.

Philip Workman, 53, requested that his
final meal be a vegetarian pizza donated to any homeless person located
near Riverbend Maximum Security Institution.

He was executed there at 2 a.m. ET Wednesday.

But prison officials refused to honor his request, saying that they do not donate to charities.

That apparently upset a few people willing to pay for and deliver a lot of pies themselves.

Homeless shelters across Nashville were inundated with donated pizzas all Wednesday.

“I
was like, ‘Wow, Jesus!’ ” said Marvin Champion, an employee of
Nashville’s Rescue Mission, which provides overnight shelter, food and
assistance to more than 800 homeless people a night.

“I used to
be homeless, so I know how rough it gets. I seen some bad times — not
having enough food, the cupboards are bare. But we got pizza to feed
enough people for awhile,” Champion said.

“This really shows the people here that someone out there thought of them.”

Donna
Spangler heard about Workman’s request and immediately called her
friends. They all pitched in for the $1,200 bill to buy 150 pizzas,
which they sent to the Rescue Mission.

“Philip Workman was trying
to do a good deed and no one would help him,” said the 55-year-old who
recruited a co-worker to help her make the massive delivery Wednesday
evening.

“I knew my husband would have a heart attack — I put
some of it on the credit card. But I thought we’ll find a way to pay
for them later,” she said. “I just felt like I had to do something
positive.”

read rest of the article