Well,
we just arrived safely in South Africa. Yesterday’s quick tour of Paris
between flights was fun, even if we were zombie-like having flown all
night. Last night’s flight the length of the African continent was
wonderful – not many people on the flight, so Karen and I were able to
stretch out and sleep on a row of seats in the back of the plane.

Now on to today’s blog subject: God is still healing. Fact: God is in the healing business. Chad’s blog below
from
Mozambique will show you that. I
have some pastor friends who have never seen God heal anyone and therefore teach
that God stopped healing people after the first disciples died off. I think
this is why the Bible says, “Don’t let many of you become teachers.” It is so
easy to get doctrinal issues wrong.

I figure if Jesus’ whole evangelistic ministry hinged on
meeting the felt needs of the people around him and if he instructed us to do
the same and if the Bible gives us three different lists of spiritual gifts and
detailed instruction about how to use them, he probably didn’t intend to switch
game plans without telling us. My opinion is that some of our “teachers of
the law” should be instructing us differently.

Many of you grew up in churches that have this problem
of disbelief and you understand what I’m talking about. I invite you to show this blog to
your pastors.

“The blind receive their sight and the lame walk; the lepers
are cleansed and the deaf hear; the dead are raised up and the poor have the
gospel preached to them.” Mathew 11:5 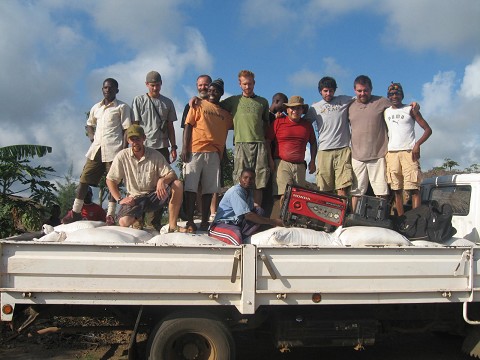 We pull up to a town on the way to our open air outreach and
the Lord leads me to the passage above.
This was the second passage that I had received in the same day about
the blind receiving sight so I was very blown away by the passage.

Would this really happen? Would the Lord allow me to see healings right
before my very eyes? I believed and was
ready for anything the Lord wanted to do.

We arrived at our location.
The plan was to have worship music for an hour, then preach and invite
people to Jesus and then ask if any wanted to be healed. Herb came to me and asked me to preach the
message so I jumped at the occasion.

During the worship I was situated right behind a boy that
was blind in one eye. Was this the boy
that the Lord wanted me to lay hands on?
I asked the Lord to bring that boy to me when we asked for people to come
forward for prayer. We continued to
praise and worship as nearly a hundred and fifty people piled in. 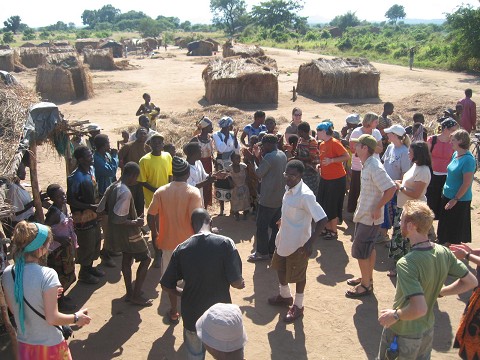 The music lowered and it was time for me to preach. I asked the Lord to take control and once
again He took the drivers seat as the Holy Spirit dropped.

I shared the saving grace that only Jesus
could bring and right before I was about to give the invitation for people to
receive Jesus, a guy on a motorcycle came roaring in out of nowhere.

This guy was either drunk or crazy because he
came right up behind the crowd and started doing donuts, taking everyone’s
attention off of the event.

I prayed to
the Lord and asked Him to take this man away.

This man got off his bike threw his hands in the air and yelled for a
couple of minutes and then returned to his bike and took off. Praise God!

Right as he took off and we brought the attention back to
the event the power cut off and we had no lights. I told herb to take control and just yell and
ask those who wanted to ask Jesus to come into their lives to repeat after
him.

At least 60 to 80 hands went flying
into the air as the power kicked back on and everyone was crying out for the
Lord to come into their lives.

After we gave the invitation Herb asked if there were any
sick in the audience that wanted prayer.

Immediately, hands went flying in the air and a lady stepped forward with
a baby on her back stating that she was deaf in her left ear. Herb told me that this is going to be awesome
when she gets healed and gives a testimony that she can hear in her ear.

I loved hearing his faith so I stood in
agreement with him as we all began to pray.
We laid hands on her and she was healed.
Her left ear was opened up and she testified that she could hear. What a miracle.

Our team began to flood the audience and pray for the
sick. I panned the audience and right
before my very eyes was the boy that I had seen before with the blind right
eye. I told Herb who was close to him to
grab him and bring him forward.

I put my
thumb over his eye and called complete healing over his eye. I cried out to the Lord for this boy and as
the translator spoke to the boy he said that he could not see out of his eye
before but now he could see. The boy was
healed and we had him share to the audience.
I was completely at awe at Gods power and praised him with all of my
soul for allowing me to be a part of His power.

Throughout the night a baby was healed from lung problems,
three people who could not bend their backs were touching their toes and
jumping in the air and numerous head pains were completely healed.

The night was completely divine and I praised God for
everything that He did.

I drove back in
the truck bouncing up and down with the biggest smile on my face. Was this really real what happened?

God is so real and alive and I know that this is just the
tip of the iceberg. I know that God is
about to really break free and hundreds to possibly thousands are going to come
to know His saving Grace.