Faith for healing – a story of how it works 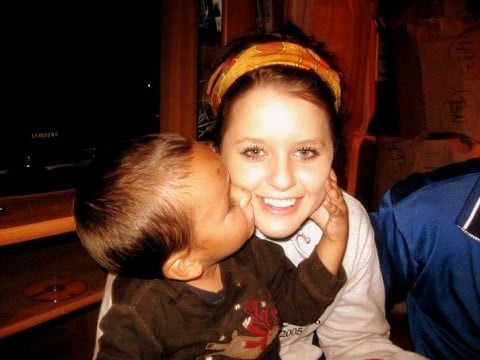 Amanda: When
we were still in Mozambique, Tiffany was suffering from skin infections.
She had multiple bug bites that were infected.  She also had eczema that
was all over her hands.  On top of that, one morning she came to me and showed me
her pinky finger, which had swelled to three times its normal size.  She had no
idea what was wrong.

Tiffany: God has been giving me situations to be faithful in.
That doesn’t just mean doing what He says to do, it means trusting that
He is who He says He is.. and that He DOES care about the “small
things”. It’s easier sometimes for me to believe He cares about the big
issues, but not the small, unimportant ones. Boy was I wrong. And this
is how He showed me that not only is He a BIG God, but He’s a little
God too.. in the sense that.. nothing is insignificant to Him if it has
to do with His kids.

As
she was showing me her finger, God told me VERY clearly, “Amanda, pray for her
because I want to heal her”.  Now, I do NOT see myself as someone who is
capable of praying healing over someone.  I told God to find someone else.
He kept gently reminding me that he wanted ME to do it.  I kept putting it
out of my mind.

A
few days later (yes, I really argued for a few days), God told me AGAIN to go
pray healing over her because he wanted to heal her.  My
opportunity slipped away.  I decided to make a deal with God.  I told
him that if he created another opportunity that day that I would do it.
Well, another
opportunity never presented itself, so I thought I was off the hook.  Ha
Ha Ha.

God is so patient.  He told me
again to pray for her and I whined, “I don’t know what to pray”.  God then
responded to me, “Amanda, where is your faith”?  I thought that was an
excellent question.  I sighed and then told God that I had no clue what I
was doing but that I would do it if he really wanted me to.  When I opened
my eyes, who do you think I saw??  I saw Tiffany sitting on the beach below me.  She was all by herself.
I rolled my eyes upward and said, “really?” under my breath.  He answered,
“REALLY!!  Now GO!!”  So begrudgingly I jumped off the wall to join her on the
sand.

Somehow I knew what God was saying to Amanda. I don’t know how… I just knew.

I
stood right where I landed for a good minute or so.  My heart was
pounding.  I wondered why I was so nervous.  After I finally gathered
the courage, I walked to where she was sitting and plopped myself down on the
sand next to her.  I opened my mouth and the word, “Sooooo” came out of my
mouth.  Then she stuck her hand in my face.  She said God talked to
her as well and she knew why I was there.  I figured at that point that
God was really serious and I knew I had to pray.

When Amanda came and sat by me, God told me that He was going to use her to heal my finger. So I believed it. With everything in me. I was ready to be healed, and I saw her battling. So I didn’t give her a choice. With my finger in her face, she had no other choice but to have faith. And neither did I.

I had no clue what I was doing, but I was going to pray anyway.
So I prayed for her finger.  Then she prayed over herself and while she
was praying, God told me that I needed to pray again.  I prayed for her again.  Then I told her that I thought she was
supposed to go rinse her finger in the salt water.  She didn’t skip a
beat.  She marched down to the water and put her hands right in.
Then she turns around and points at me to come join her by the water.  I
get up and run down there.  I thought God miraculously healed her finger.
He didn’t, but he told her that she needed to rinse her whole body because he
wanted to heal everything- not just her finger.  She thinks I’m supposed to get
in the water with her and pray over her again.  At this point, I’m done
arguing with God, so I walk out with her and pray again.  I
don’t know exactly what I was expecting, but nothing happened.  I went to
the bathroom and when I came out my hands were tingling.  So she told me to pray for her again.  I
did.  Again nothing happened.

I know Amanda says nothing happened, but SO much was
happening. I knew God wanted to heal me. But right after I rinsed off
in the ocean, God told me that physical healing was not going to come
until the healing of the mind did. Renewal of the body would follow renewal of the mind. What needed to be renewed? Our idea of faith.

I
couldn’t understand it.  I KNEW that God told me he wanted to heal her.
I KNEW he told me to pray for her.  So why didn’t he heal her?  I
started looking in the Bible for healing stories.  I noticed that many
times when Jesus healed – it was in response to the faith of the person asking
for healing.  I knew she had faith but I wondered about mine.

For
days – God would prompt Amanda to pray for me and she would walk in obedience.  My finger actually got worse.

Everyone began to wonder if I should
start taking medicine or something.  I was losing feeling in my finger.

She refused to take anything.  She knew she was getting
her healing.  I wondered why God chose ME for this.  I read the story
in Luke 11 that teaches about persistance in prayer.  My persistence and obedience was showing my
faithfulness.  I flipped to Luke 17 and found the part that says that if
we are found faithful in the little things, we can be trusted with the big
things.  This pinky finger seemed like a small thing, but to God it
wasn’t.  He wanted me to be persistent, obedient, and faithful.  I
was doing my best – I just didn’t understand why things were getting worse.

I soon realized that I thought that I had to have the perfect words to pray.
God told me that he just wanted to pray the words he put on my heart.
Again he asked me, “Amanda, where is your faith?”  I wondered
why he chose me.  My spoken words are sometimes so awkward – especially
when I don’t know what I am doing.  The focus had to be on HIM and not my words.  I
also had to believe that he wanted to heal her, but not only that, I had to
believe that he really wanted to use ME to heal her.

I saw nervousness in Amanda every time she’d pray for
me. I couldn’t figure it out. We are close friends, there is no need to
be nervous. Soon I realized it was a battle that went beyond
friendship… God was showing her that He found her WORTHY to be used,
and loved both of us too much to leave us in the condition we were in.

Once
I started praying from my heart, God really started moving.
Within a day
and a half, her finger had gone back to normal.  She was healed.

I
learned a lot about faith from this experience.  I learned to have faith
that God really does want to use ME – yes ME – to do amazing things for his
Kingdom.  He wants to use me, but he wants to use me to bring glory to HIM
and not me.  I can’t make it about myself.  It doesn’t matter whether
I know what I’m doing or whether I have the right words.  It just matters
that I do what he asks me to do.

God is so rad. He is still showing me that He cares
about the things I care about, no matter how small. I am learning not
to limit God to the big things, but to have faith… to trust that His
love is big enough for the small things. And my finger is healed!

Faith is the confidence that what we hope for will actually happen; it
gives us assurance about things we cannot see.