Finding God in the Midst of Death

I have spent the past five days with the Searchlight participants urgently praying for Haiti. Our prayers are being answered. Light is infusing the darkness as we speak. This article from Ron Hutchcraft Ministries illuminates the faith rising from the rubble. CNN and other networks went to chur…
By Seth Barnes
17 January 2010, 12:01 am
By Seth Barnes
17 January 2010, 12:01 am

I have spent the past five days with the Searchlight participants urgently praying for Haiti. Our prayers are being answered. Light is infusing the darkness as we speak. This article from Ron Hutchcraft Ministries illuminates the faith rising from the rubble.

CNN and other networks went to church today. In Haiti, that is. Because the faith celebrated there today has become part of the story of Haiti’s darkest hour.

It’s not a surprise to those of us who have been with these precious brothers and sisters. Some of them live every day with a tenacious faith that sustains them through their grinding poverty. And when they worship, it’s not all buttoned down like so many American churches. It’s exuberant! 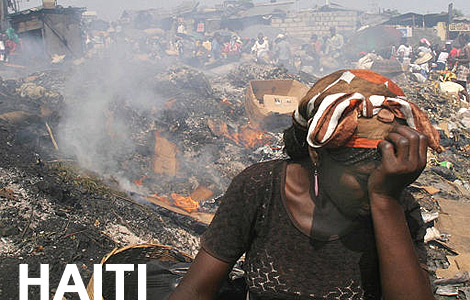 That’s why the CNN reporter at a Haitian Sunday service had a hard time hearing the anchorwoman on the other end. Yes, their church was destroyed by the earthquake.
But that didn’t stop them. They worshiped in a nearby park, patching together a platform from wood scraps and somehow finding a generator and a sound system. Those Haitian believers were clearly experiencing the Presence of God in the middle of the death and destruction all around them.

One reporter seemed almost incredulous at the faith he had encountered. “Everyone we’ve spoken to – they’re not questioning God; they’re thanking God. We see spontaneous processions through the streets of Port-au-Prince, joyously praising and thanking God. At times like this, so many people’s faith has defied the odds. That’s what’s pulling them through.”

Defiant faith. That’s what it is. Not faith that denies the awful grief of having lost someone whose death and final resting place they may never be able to confirm. Not faith that doesn’t struggle with where to go when you’ve lost most of the little you had. Those realities are painful, undeniable. But for all the pain and loss on their scale, they have something on the other side of the scale. Something – or Someone – who balances the scale on the side of hope.

And the world is watching and listening. What they are seeing is a power that is greater than even life’s most overwhelming shocks. Because its Source goes beyond this life.

Put simply, their life is in the hands of a Savior who conquered life’s most fearsome enemy, death. Who, according to history, walked out of His grave under His own power. He stands above all the religions and prophets of history as the only Man who validated His message with a resurrection. Most every religious leader has promised eternal life. But only Jesus proved He has it to give.

What we are seeing in the defiant faith of the believers of Haiti is, in short, Jesus Christ alive. In them. The Bible describes this infusion of uncrushable life this way: “In His great mercy He has given us new birth, into a living hope through the resurrection of Jesus Christ from the dead” (1 Peter 1:3). Hope that is a Person, not a religion.