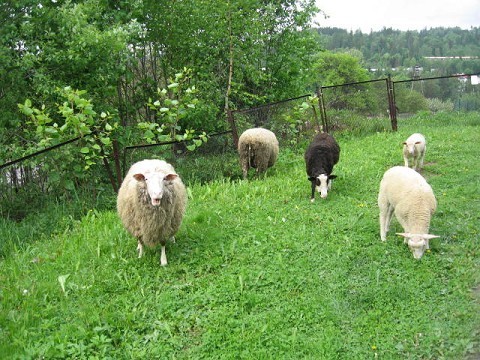 I was jogging yesterday when suddenly I was joined by a couple of black Labradors in full stride. They hung with me for nearly two miles before we returned to what I assumed was their home. But try as I might, I couldn’t get them to stay there – they just kept following me.
Fortunately the couple living there came outside and explained, “Yeah, they’re nice, well-kept dogs, but they don’t belong to us. They’re lost and have been here for a few days.”
Lost things – Jesus had a fondness for them. Just look at the scene where Jesus is talking to a bunch of sinners (as Luke tells it in chapter 15). The Pharisees don’t like this. They don’t get his heart for lost things, so he tells them three stories. There’s a lost sheep, a lost coin, and a lost son. When you lose something you own, you want to get it back – and that’s how Jesus feels about us. We were lost but now we’re found. Jesus is a shepherd looking for lost sheep. He’s constantly looking for and finding lost hearts, hearts that have been tossed every which way by life’s hurricanes.

Because he wants us to become searchers and finders of lost hearts too, I think he gives us a special grace if we’ll trust him to help us practice finding lost things. I was with my daughter Talia in Vogel State Park. She lost her earrings somewhere and had know idea where. We prayed and asked him to lead us to the earrings. Immediately, he led us right to where they were. We were so amazed – it was eerie to be led like that.

Years later, I was swimming in the Caribbean surf with Tom Davis. A wave came along and washed away his glasses. The surf was murky and choppy – they were long gone. But I prayed, reached my hand down, and miraculously, grabbed hold of them.

It seems everyone has got a story like that one. Greg Sailors was on a family mission trip and had a similar experience: “One of our guys lost his glasses in a shallow river. We came out of the river. We prayed and went back like an hour later and swam around and found them.”

Mark and Kathy Lucas shared a similar story – they had lost their keys in a one acre slope of snow where they’d been sledding. Mark prayed, walked, stuck his hand in the snow and pulled them out!

We who were lost in selfishness and shame know what it feels like to be found. We were disoriented, feeling panicky and without bearings, lost in the deep woods of a life that wasn’t working. But Jesus is a searcher and a finder. He is our shepherd; he knew we’d gone missing and went looking for us. And what he finds, he keeps.

So many people have lost their way in life. They hate it, but there they are, stuck, feeling marooned by fate. More of us need to start imitating Jesus – we need to practice searching for lost hearts.