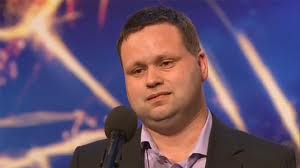 It’s why, within moments of hearing Potts begin singing Nessun Dorma, many in the audience (including one of the judges) began to weep. Yes, there’s his incredible tenor voice, but Pavarotti doesn’t impact you like that.
You weep for the magic of an obscure cellphone salesman sharing that voice with the world.
I think it’s a spiritual transaction. I think that all of us have got something inside that cries out for expression. It’s not our dream – it’s God’s dream we’re incubating. And when we give voice to it, we join the angels in heaven as they give praise to God for his gift.
I knew a young lady who was trained in singing opera. She has a beautiful voice. But none of us who knew her had heard it.
She had experienced so much pain in her life that she had stopped singing. She’d gone mute.
People are like that. They may struggle to find and develop their voice. Then eventually, as they find it, you sense their voice giving you a window to their soul. But then life happens and they shut down and hide the very mode of expression God gave them.
It was an incredible Sunday in Nsoko, orphans seated all around us and on our laps, when, shining like the African sun that shone down on us, the young lady with the opera voice chose to sing again. I’ve got it on video and it affects me like listening to Potts does.
Many of us need help discovering our voice and many of us have stopped singing. The world needs us to find our voice and feel God’s pleasure as much as we need it.
Have you discovered your purpose and your voice? You’ve got one; we all do. There’s little in life more important than finding it.