Five promises of a spiritual father

On a maudlin note, did I ever tell you guys how much I love you? I can do that in my living room behind a computer – it’s not too embarrassing. Read thru some of the blog comments from the last two days and you’ll see how the body of Christ lifts the spirit. I don’t know if I underscored the poin…
By Seth Barnes
06 March 2008, 12:03 am
By Seth Barnes
06 March 2008, 12:03 am

On a maudlin note, did I ever tell you guys how much I love you? I can do that in my living room behind a computer – it’s not too embarrassing. Read thru some of the blog comments from the last two days and you’ll see how the body of Christ lifts the spirit. I don’t know if I underscored the point enough in yesterday’s blog.

When I said it was the word of the Lord that keeps me going, most often that shows up in the form of encouragement from my brothers and sisters in Christ. If you want to give someone a word from God today, tell them something about themselves that you know makes God smile. That’s as sure-fire a way to bring the kingdom to their lives as I know. 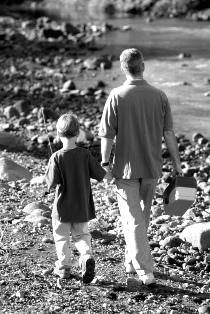 Yesterday, my son made me proud in Swaziland. He helped carry baby Moses’ dying mom to the funeral. And then he delivered the eulogy. Today he wrote this blog about it. I couldn’t be more proud of a son.

This fathering thing is emotionally wrenching. This morning I’m thinking about the concept of “spiritual fathering.” I’ll never forget teaching discipleship to a group of young people in Philadelphia about four years ago. Just before starting, God spoke to me and said, “This is a fatherless generation.” I guess I’m kind of obtuse. My parents raised me to be strong and self-sufficient. I had a warm home. My dad provided for us. So the idea of not having a father in one’s life hadn’t really penetrated my reality. As I looked at the young people and felt God’s heart for them, it blew me away.

Later, I felt God giving me a choice between being a father or being a manager. I’m a good manager. Most things I manage do well. That role is a place of safety. I just naturally think about what needs to happen next organizationally. God was saying, “Leave that place of comfort.” And after considering, I chose the role of being a father.

I’ve been trying to extract myself from management ever since. You have to leave before you can cleave.

Everywhere I go, it seems people are looking for spiritual fathers. Paul said we don’t have many – they’re in short supply. Karen and I are just about done rearing our kiddos – we think they’re pretty awesome, but they’re making their own decisions at this stage. So now we’re focusing our attention on becoming a spiritual mom and dad to many of their peers. I can’t imagine anything more satisfying. We’re making it our aim to help fulfill the heart cry of many to anchor themselves. There’s no manual for this – we’re making it up as we go along. But we’re putting ourselves out there, and as we do so, we find that our availability smacks into a great father-hunger in a generation of young people.

If discipling is waking up to one’s identity and role in the Kingdom of God, then a spiritual father is the one who often does the rousing. “WAKE UP!” We yell, yanking them out of comfort zones. Mothers tend to want to keep their children around the house or in the neighborhood, whereas fathers push them out into the big, bad world. Gary Black is doing that with Seth, Jr. in Swaziland – showing him Covenant and Kingdom. It’s one of the most precious gifts anyone has ever given me – I think I’d take a bullet for Gary.

If that’s the point of spiritual fathering, then there are certain promises a spiritual father makes. The five I list below hold for spiritual moms as well. I list them here for guys since we seem to struggle more to find our roles in this regard.

Because people often don’t live up to their promises, a person’s status as a spiritual father or mother can only really be confirmed in the rearview mirror of life as the promises are fulfilled over the long-term. To say “I’ll be your spiritual father” and then fail in one or more of these promises is to underscore the lies the disciple may have absorbed about all the father figures they’ve ever had. Instead of lifting that young person up, it wedges them deeper in the isolation of their orphan spirit.

Stated more plainly, if as a father you make the promise, “I’ll be there for you” and then you leave the disciple dangling at one of life’s crossroads, then the pain of all the old father wounds begin to throb.

What’s true in building trust in business or marriage is true in spiritual fathering – better to under-promise and over-deliver. Better to set expectations low and exceed them. Young people have been lied to so regularly that they have grown cynical. Better to avoid all the drama of dashed hopes by only voicing those promises that you know you can deliver on.

Here are the two promises I’d begin with:“I’ll believe the best about you” and “I’ll tell you the truth.” You may have to change your thinking. You’re not allowed to criticize and you’re not allowed to hedge. But keep those promises, and over time, trust will come – you’ll be on your way to becoming a spiritual father to someone you love.