Following thru on a promise in Haiti

Thursday we took enough supplies to the
twins to provide 15,000 meals of rice and beans. 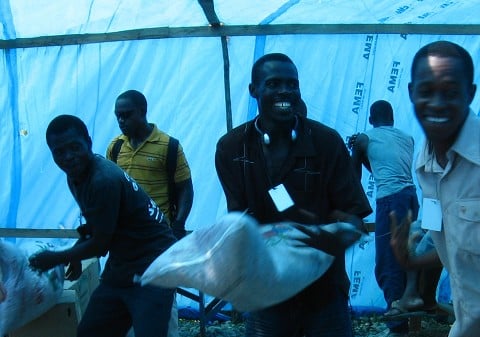 The load weighed
so much that the machine bearing this precious cargo suffered two flats
and a double blow out while trying to traverse the city, leaving us
stranded for hours on the roadsides of Port-Au-Prince with a
temperamental truck determined to no longer carry its heavy burden.

We
transferred dozens of sacks into the back of our vehicle to relieve
some pressure from the overburdened truck. In the meantime, one of the
twins’ parents came looking for their much needed and promised
provision. Thankfully the camp’s president that came in search found us
and we were able to load down his truck with boxes of oil, further
lightning the main distribution truck’s load.

Several hours
later than anticipated, which equals perfect timing in Haiti, we arrived
at Marassa.

Media will tell you that to drop $15,000 of
supplies into a couple of tent communities without the UN for security
is unsafe to say the least and practically insane. However, we arrived
with a handful of staff and trusted the security team of the Marassa
camps to handle any situations should they arise, thereby empowering our
Haitian brothers and sisters.

Children clapped and sang as we
rolled onto the grounds. A hopeful, expectant crowd gathered and never
once did I feel unsafe. The camps’ leaders thanked us and donors for
keeping our word from February and returning to help their people. 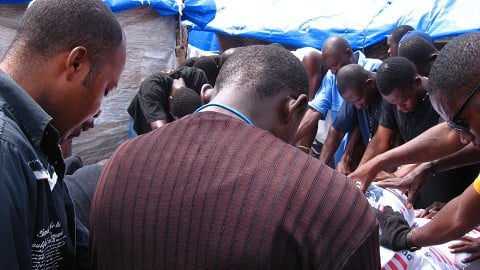 As
bags and boxes were unloaded and stored, there were smiles and jubilant
shouts. The men seemed to make it a game to finish the task before them
quickly and efficiently, but mostly full of fun. It was good to see
laughter in the camp.

Clint
Bokelman, the director of short term
missions for AIM, encouraged the president of each camp to gather the
male leadership and pray over the provided food prayers of blessing,
prayers of thanks and prayers that it would be multiplied just like the
fishes and loaves of Bible times.
The leaders did so, and the part that
brought me to tears was when one man at the first camp fell to his
knees, stretched his arms out over the food and fervently gave thanks
and praise to God.

There is still great need in these camps.
Returning home at the end of the day, doing the math, there was the
dawning realization that the huge load we delivered would amount to
roughly three meals a person. It was then that the vast need really
began to have a reference point in my mind and that sinking feeling
threatened to make me lose sight of the good that had happened. Clint
reminded me of the story about the man throwing starfish back into the
sea: “It mattered to that one.”

What was brought in on those
trucks Thursday was more than just three meals, it was also hope. Hope
for another day. Hope for a future. The message of the Gospel shared
through beans and rice.