For when mom dies – a Legacy Book

44% of the adults who are left alive in Swaziland have HIV. What do you do with their children when they go? What do you do to console them, to let them know they’re still loved, that they’re special?   Morgan Mckeown was one of the first AIM people into Nsoko, Swaziland. The children of N…
By Seth Barnes
29 September 2009, 12:09 am
By Seth Barnes
29 September 2009, 12:09 am 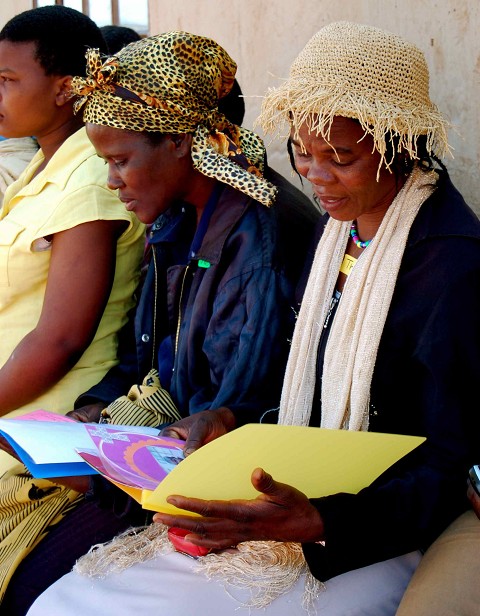 44% of the adults who are left alive in Swaziland have HIV. What do you do with their children when they go? What do you do to console them, to let them know they’re still loved, that they’re special?
Morgan Mckeown was one of the first AIM people into Nsoko, Swaziland. The children of Nsoko continue to haunt her dreams – she has taken them into her heart. Morgan continues to ask God, “What do we do for them?” And the good news is, he’s given her some great ideas.
The video below shows you one of the best ones I’ve seen – a ministry
called Legacy Books. The idea is that when a mom or a dad learns that
they have AIDS, we help them compile a book of memories to leave with
their children after they die. It’s such a simple thing, but it can
mean the world to a child who’s left to wonder, “what was mom really
like?”
When Morgan’s team presented the books, the women receiving them were beaming as they read their story and saw their picture in a
book. Many of them don’t have any pictures at home – they
laughed as they looked at themselves.

Their stories are heartbreaking. Like Nomsa Gina who lost both of
her parents when she was very young and had to live with her
grandmother. Her brother was the only one taking care of her and he
committed suicide when she was 15. Her grandmother then passed away a
year later and by the ago of 16 she was left completely alone. She had
her first child three years later and when he was one year old, his
father took him and she has not seen him since.
Many of them didn’t know where they were born, their parents had
died at a young age, had at least one child who had died, and they felt
like they didn’t have hope. Their life dreams were simple, to live to
see their grandchildren, and for their kids to go to school.
But now, they are starting a legacy.
A Legacy Book costs about $30 to compile. If you’d like to help a mom or dad give one to their children, click here and add a note “Legacy Books.” And check out the following video.