Forgiving the neighbor who killed your family

I was amazed when I read the story of the new documentary As We Forgive.  I asked Teri Frana to write the following blog about it. She found the story “deeply challenging and convicting.” I can’t imagine my sister’s murderer getting out of jail, moving next door, and asking forgiveness. 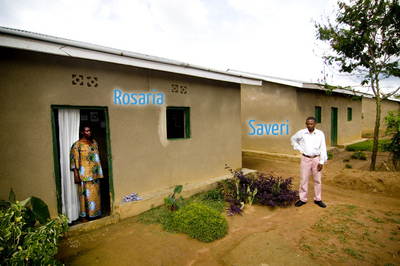 It started fifteen years ago in Rwanda, Africa, when close to one million people died over the course of 100 days.  Through complicated ethnic and social events, the government of Rwanda convinced and resourced people from the Hutu tribe to exterminate the Tutsi tribe.  Up till that time, these tribes lived side by side sharing the same community, language, and culture.  In 1994, the peace was shattered with attempted genocide.

It wasn’t a neighboring country which invaded, it was their neighbors.  It wasn’t strangers who did the killing, it was their childhood friends.  People in the victim’s own village, church, or neighborhood hunted down, hacked with government issued machetes, beat to death, or otherwise brutally murdered anyone from the wrong tribe.

In the aftermath of the violence the government was overthrown, the perpetrators were sent to prison, and the survivors were left to cope with the devastating losses.

Ten years later, the government began to release the confessed murders from prison.  Thousands of prisoners have now been released into their communities to try to rebuild their lives living face-to-face with the survivors they were unable to exterminate.

The documentary, “As We Forgive”, follows some of the people of Rwanda as they navigate through forgiveness and reconciliation.  Here is an excerpt from an article in Charisma reviewing the film:

Narrated by actress Mia Farrow, As We Forgive debuted on PBS World this week and follows two women who are asked for forgiveness by the men who murdered their families during the genocide. The 100-day ethnic conflict between Hutus and Tutsis left more than 800,000 Rwandans dead and hundreds of thousands widowed or orphaned.

In an effort to ease overcrowding prisons, the Rwandan government in 2003 released some 40,000 inmates who had murdered their neighbors and fellow church members, forcing communities to find ways to forgive and reconcile.

“I was just taken by this scenario: What happens when a killer comes home? When they ask you for forgiveness?” said producer Laura Waters Hinson, who decided to make the documentary after visiting the nation in 2005 with her Anglican church, which is aligned with the diocese in Rwanda.

“I think it was something that personally was incredibly challenging to me because I didn’t know if I could forgive someone who raped or murdered my mother or my sister or her children,” she added. “It was just an unfathomable situation.”

The film follows Rosaria and Saveri, who had been friends before Saveri murdered Rosaria’s sister and her children during the genocide. Rosaria said it was her faith that motivated her to attend reconciliation seminars and eventually forgive Saveri.

This story begs us all to ponder the depth of forgiveness God is willing to go to bring healing and restoration.

It’s unbelievable scenario. I can’t imagine how I’d respond. It would put everything I believe about Jesus to the test. And for that reason, it’s one movie Christians really need to try to see. Ultimately, it leaves us asking the question: What would you do if you were Rosaria?

For more info on the film, go here.