Four Stories from the Peruvian earthquake

All you have to do is scratch beneath the surface a little and you turn up many heart-wrenching personal stories. Here are four that we’ve run across in the aftermath of the Peruvian earthquake of 2007. Esther Atumcar de MagayanezEsther is 69 and her husband is 70. Unlike most of the inhabita…
By Seth Barnes
10 January 2008, 12:01 am
By Seth Barnes
10 January 2008, 12:01 am

All you have to do is scratch beneath the surface a little and you turn up many heart-wrenching personal stories. Here are four that we’ve run across in the aftermath of the Peruvian earthquake of 2007. 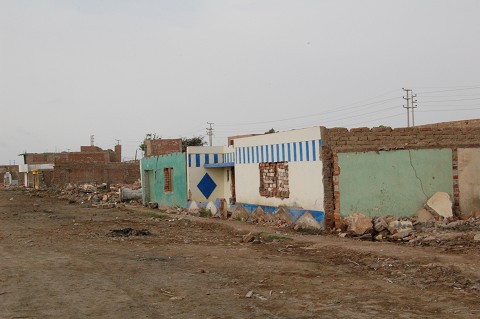 Esther Atumcar de Magayanez
Esther is 69 and her husband is 70. Unlike most of the inhabitants of this particularly hard-hit area, they have tenaciously chosen to stay near their former home.

Their home was totally destroyed, but they are staying behind a small store in a temporary structure made of plastic and bamboo thatch. Some of their six children were living in the same community and others were living elsewhere.

They have been married for 52 years. They were self-employed and had done pretty well for themselves and their family. Esther told us that they have a bank loan that totals 505 Soles (about $260) and that the bank is demanding that they pay $50 a month to repay the loan. Because they are elderly, employment is almost impossible for them. Esther took a job in a fish factory where she works irregular hours (when the boats come in with catches). She earns about about $23. Esther has cut her fingers many times in her factory work. When we spoke with her her fingers were covered with tape. Some of it black electrical tape, some of it duct tape and some of it masking tape.

Not being able to find decent employment and with the bank demanding more money, having lost everything they had worked their entire lives to build, she is overwhelmed and as she shared, the tears streamed down her worn face.

Maricruz Llanoz
Maricruz is a single mother of four children between the ages of 16 and 2. Her 82 year-old mother is deaf and mute and her 97 year old father is wheelchair bound. The youngest of her children, Maria, is 2 and is both physically and mentally handicapped – a truly a beautiful child and they are caring for her as well as they can. She has never walked. and has serious bronchial problems. The only thing she eats is a manufactured milk-like substance called PediaSure (which is very expensive). Maria is being cared for primarily by her aunt.

Roxanna Felipa Quispe
We prayed for Roxanna, a widow whose husband died of HIV. She herself contracted AIDS from her husband. She has two children ages 4 and 7 who have been quite sick recently. Her mother has also been quite ill. The government will provide medications for her HIV but she is responsible for all tests and transportation to the site where the meds are provided. Because she cannot afford to pay for the transportation, she is not currently taking any meds for her HIV.

Canchamana community
These people were farmers who work with livestock (mostly goats and cows). They lived right on the waterfront in the north of Tambo de Mora. After their homes were destroyed by the quake, they moved up onto a bluff that overlooks the beach area.

They cleared off this dump area on the side of the road and put their shelters there. 37 families live in this very remote area. Everything has increased in cost dramatically in the earthquake zone (building materials, food, etc). Every day their lives are so hard.