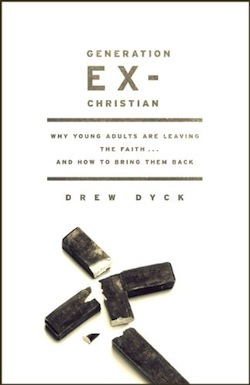 The book Generation Ex-Christian by Drew Dyck (as summarized here by David Mays) depicts a scary future for anyone who cares about the Church in America.
Young people are dropping out of church at a rate five to six times the historic rate. And partly because adolescence is so much longer, don’t expect them to come back like earlier generations.
Postmoderns process reality in a profoundly different way. How they feel in a particular moment trumps any previously made commitments. Nothing can be absolutely true for everyone. Experience is the key to finding truth. Rationality and logic don’t fit in their spiritual arena.

Broad proclamations of truth are seen as arrogant dangerous. Homosexuality is not about right and wrong but about dominance and oppression. When people believe something very strongly, they are apt to try to force that belief on others.

Postmodern thought believes a literary text can ultimately have no fixed meaning. This has moved from literature to life, so that there is a radical skepticism toward any truth external to oneself.

Postmoderns are also very concerned for the marginalized. Postmoderns often condemn the church for being insensitive in this area, even pointing back to the Crusades and the Inquisition. Moral relativism and a low view of truth are clearly irreconcilable with a biblical worldview.

Many have negative childhood experiences of pain and abuse. It is difficult for children to differentiate between their abusers and God. If abuse is not acknowledged or done in the name of God, it shakes the foundation of faith. And of course many other human failings sour people on faith. Many leave for emotional reasons and find intellectual reasons to support it. “Often disbelief is only a smoke screen, a reflex of recoilers to mask deep disillusionment and pain.”

A key to reaching out is empathy, not arguments. What were their childhood experiences like? Have they encountered Christians who they saw as cruel hypocrites? Let them share their grievances but don’t put them on the defensive. Watch for emotional fervor indicating past suffering. Concentrate on learning their story. Empathize with their pain. Healing comes in the context of relationships. Earn trust. Help them make sense of their hurtful experiences, delineating between God and those who hurt them. And live a life of joyful faith.
They desperately need passionate storytellers who will re-enchant the
gospel story. Build trust. Invite them to serve. They are more likely to
discover truth through experience than reason.
The young people most likely to remain faithful are those whose parents modeled a dynamic faith and those who established their own personal devotional lives.