Giving orphans identity: I AM boxes

While she lived in Swaziland, Lisa Black fell in love with the orphan children of Nsoko.  She called them “children of the dirt”; they have nothing, no parents, no food, no possessions. In some cases a sister of eleven years old is the head of the household.  In other cases a three…
By Seth Barnes
24 July 2008, 12:07 am
By Seth Barnes
24 July 2008, 12:07 am

While she lived in Swaziland, Lisa Black fell in love with the orphan children of Nsoko.  She called them “children of the dirt“; they have nothing, no parents, no food, no possessions. 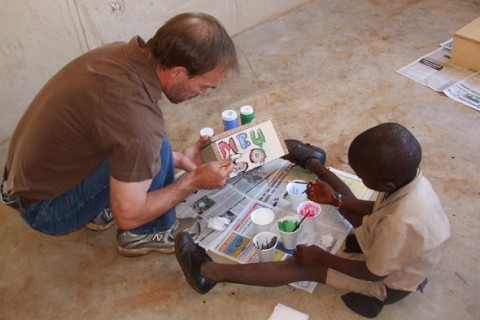 In some cases a sister of eleven years old is the head of the household.  In other cases a three year old toddler may have to make the mile-long trek by themselves from their homestead to our carepoints to get food.

Lisa realized that many of these little children have no sense of identity – they are numb, with nothing to call their own, no one to give them hugs or speak tenderly to them.

She asked God what could be done and he gave her the concept of “I AM boxes” – a wooden box they could put little trinkets and Bible verses in, complete with a  mirror on the lid for them to look in.  Here’s how she describes her vision: “The I AM boxes will represent the individual stories, the truth of
their lives, and the Identity given to them by the Lord, and the TRUTH
of who they are called to be. The idea is dispelling shame, healing,
and speaking truth and life. The children will also actually OWN
something that is exclusively theirs to hold their minimal treasures,
including their most important treasure, the Word of God.”

On our recent trip to Swaziland, we gave I AM boxes to 70 orphans.  I spent time helping Mbuso make his I AM box.  Mbuso didn’t say much, but he followed my lead.
We made a bracelet then painted the box.  I would outline a flower or a tree and then he’d fill it in.  The paint was too thin and it ran.  I dabbed it and tried to clean it up.  Mbuso didn’t seem to mind.
Then we got some candy and the bracelet and put them inside the box.  It was his.  Something that he didn’t have to share with anyone.  I’ve had so many toys all my life.  Every Christmas and birthday there were more prizes proving that I was special.  This was Mbuso’s first prize and he is very special.
In the end, 70 beautifully painted boxes lined the floor.  Each had a story to tell.  We have so far to go if we are to help raise up a generation of Swazis that can find its way out of the cultural death-grip in which it is locked.  But I think it begins with boys like Mbuso learning who they really are.