Groundhog day at the Barnes house

Blog reader Mark Lucas commented to me how much he enjoyed the rooster story I wrote about last week. It made me think, “Barnes, you’re too serious, you need to share a few more stories like that one to keep things from getting too heavy on this blog site.” I don’t know if that was the H…
By Seth Barnes
25 January 2007, 12:01 am
By Seth Barnes
25 January 2007, 12:01 am 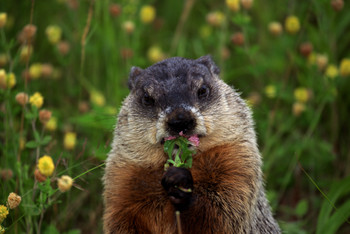 Blog reader Mark Lucas commented to me how much he enjoyed the rooster story I wrote about last week. It made me think, “Barnes, you’re too serious, you need to share a few more stories like that one to keep things from getting too heavy on this blog site.” I don’t know if that was the Holy Spirit or my man-pleasing spirit, but on the off chance that it was the former, here’s another story:

Back when our kids were younger, I was sitting on the porch when I noticed that our dog Abby had been parked under a certain tree for quite a while. She was staring up into its branches. Abby had something cornered. I was hoping that she had located whatever had killed our pet rabbits the week previously. “Seth Jr., go check out what’s going on with Abby,” I said.

Very soon the report came back, “Abby’s got a groundhog up in a tree.”

I know from experience that groundhogs are vegetarians, probably not rabbit eaters. A few years ago, we would have chained Abby up and let the poor animal escape to freedom. But this was before a certain groundhog found a way under our fence into the garden and ate up all our carefully planted lettuce. So, without any advocates to protect it, Abby saw to it that it met an untimely demise.

The violence of the thrashing the poor animal received sent all our girls screaming to the house. Who knew that our normally mellow house dog had such latent wolf-like qualities?

It was then that the rest of the family (which had been fascinated to observe the action from a safe distance) sprang into action. Estie (

10 at the time), the aspiring doctor, was the first to lay claims to the animal. The following conversation ensued:

Estie: I’m going to dissect the groundhog. I want to be talented when I’m young and old.

(then 8 years-old): (Knowing that James, a soils engineer, would be visiting us later) We need to wait for the scientist. But if he doesn’t know how to skin it, then I want Mr. Frank to.

Estie: Somehow, I know I can do it.

Emily: Just so I get the skin.

Estie: How about we hang up the skin.

Seth Jr.: I think we should wait till Mom gets here.

Estie: We have to make a big wide circle around the skin. Then you get all the little things that you want to learn about and put them in trays. And then you suck out the blood and use it for experiences.

Seth Jr.: Experiments! Anyway, I think Estie should wait for James to get here and do it in the morning.

Emily: Wait for James to get here, I insist!

Estie: Emily, you’re not Queen Victoria. I want to do it my way, not with the scientist.

So saying, Estie donned her surgeon’s garb – ski goggles, a scarf to cover her mouth, a nail apron, and dishwashing gloves. As Emily held the subject steady, she began to cut away the animal’s hair.

But when it came time to use a knife, she abruptly changed back into a ten-year old girl, “Oooh, I can’t do this. Dad you do it!”

We ended up taking the poor, undissected groundhog to an unmarked grave in the wood.

Postscript: This past month, Estie began fulfilling her pre-nursing requirements at college. Emily is an actress, and Seth and Leah have become bastions of stability in a family prone to melodrama. Abby has rid our meadow of groundhogs.