When God first starts talking to mankind, he tells us to “be fruitful and multiply.” I think he did this because he intends to bless us when we have children. It’s certainly been the case for us. As many of you know, Karen and I have five children. We had them beginning when we were 25 year…
By Seth Barnes
06 October 2011, 12:10 am
By Seth Barnes
06 October 2011, 12:10 am 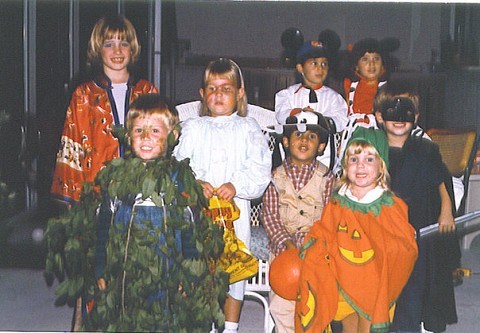 When God first starts talking to mankind, he tells us to “be fruitful and multiply.” I think he did this because he intends to bless us when we have children. It’s certainly been the case for us.
As many of you know, Karen and I have five children. We had them beginning when we were 25 years old, and they arrived all in the space of seven years.
They’ve almost always been a wonderful blessing, but now that they are all in their 20’s, it’s like having a new set of best friends. Wednesday evenings are family night – everyone arrives on our porch for a delicious meal followed by games and conversation. Someone walking up the driveway would probably hear our laughter before anything else – we all love to laugh.
Karen and I are appalled at the prevailing wisdom that says you should have a small family and you should wait until you’re financially stable to get pregnant. We look at some of the “common sense” advice that’s handed out to young couples and we shake our heads. Economics shouldn’t be a factor in either deciding when to have kids or how many you’ll have. The fact is, you’re going to make it. Life may not be easy for a while, but having lots of children will be the best thing you ever did.
For some reason, the “experts” are afraid of children and have built all kinds of scary scenarios to discourage you from having them. I was in high school when I first read about the “experts” forecast that  the world population would explode to 9 billion by 2000. They looked at the growth rate of about 2% and said that the earth couldn’t possibly sustain us all. What in fact happened confounded the experts. This month the world population will hit 7 billion, and growth continues to slow.
Forecasts have changed as birth rates have plummeted. The best guess now is that the world’s population will peak at around 9 billion in 2050.
Countries like Ukraine lead the pack, losing 1% of it’s population every year. Most European countries have seen a steep decline in birth rates. China’s one baby per couple policy looked smart when their population was exploding, but look down the road and it’s disastrous. After 2050, Philip Longman, author of “The Empty Cradle”, says each generation will be about 25% smaller than the one before it.
The book “Fewer” reports that Europe is now losing 700,000 people each year, and will lose 3 million or more each year by 2050.
In light of these trends, it’s clear that as a society, what we need is more babies, not less. And in view of the biblical command and my own experience, I’d suggest that you have lots of them. Five was a good number for us, but why stop there?