Heidi Baker expects miracles – so should you

Heidi Baker and her husband Rolland have seen the dead raised and the power of God fall in Mozambique. I want that, and many of you do, too. While in the Philippines, my son, Seth Jr., lived in the gap between what the Bakers describe as reality, and his own experience. It’s a heart-rending pla…
By Seth Barnes
08 February 2008, 12:02 am
By Seth Barnes
08 February 2008, 12:02 am 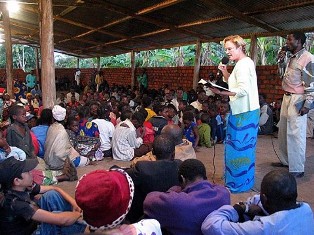 Heidi Baker and her husband
Rolland have seen the dead raised and the power of God fall in Mozambique. I want that, and many of you do, too. While in the Philippines, my son, Seth Jr., lived in the
gap between what the Bakers describe as reality, and his own experience. It’s a heart-rending place to be. He prayed for an eight year-old Filipino
boy to be healed of meningitis, and instead the boy died.

In contrast, Heidi Baker has seen
so many blind eyes open that it’s become normal. Seth Jr. isn’t anywhere near where she is, so
this morning I’m checking out her experience.
I ordered the Baker’s new book Expecting Miracles, and I did some
research online about how it is that she has prayed for so many blind people
and witnessed their healing. I
discovered an interesting thing about God in the process.

As Baker tells it, God promised
her that she would pray for blind people, and they would be healed. Taking him at his word, she began to pray for
every blind person she came across. Each
time, her experience was exactly like Seth Jr.’s. She’d finish praying, and when she examined
the blind person, they were still as blind as ever.

After praying for the first dozen
or so blind people, she was still shooting blanks in her prayers. Had she missed God? Who could blame her for thinking, “What
gives, Lord?” But still, she kept
praying.

It must have been hard for her to
have faith when time after time no one was healed. But one day, she saw a blind
woman and continued to trust God’s original word to her over her experience. As she describes it in the book, “I sobbed my heart out until God touched this lady… Looking down at her, lying in the dirt, I could see her totally white, unseeing eyes. But as I continued to stare, I saw her eyes turn from white to gray to beautiful brown, and she blinked as God restored her sight. I was so excited. As she realized she could see, she began screaming in excitement, too. She didn’t get up off the floor; she just lay there shouting in amazement.”

You can read the story on pages 159-160 of Expecting Miracles. Subsequently, as she prayed for others who were blind, God opened the
floodgates and many were healed.

This principle of persevering in
trusting God despite discouragement is a secret that John Wimber discovered,
praying for hundreds before God released his healing power. The Vineyard movement resulted. It’s a principle that gets repeated every day
and it’s something God wants all of his children to learn.

If you liked this blog on Heidi Baker, you should check out: