I have some news that I need your help in distributing:   Backed by corrupt government officials, an orphanage we work with in Carrefour/Port-au-Prince, Haiti has been trafficking its orphans.   Suspecting foul play, we’ve been investigating for the last year. We’ve not been read…
By Seth Barnes
15 October 2011, 12:10 am
By Seth Barnes
15 October 2011, 12:10 am 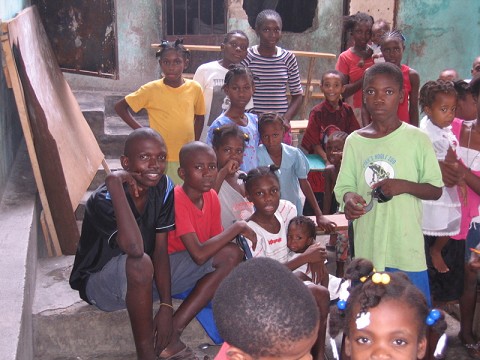 I have some news that I need your help in distributing:
Backed by corrupt government officials, an orphanage we work with in Carrefour/Port-au-Prince, Haiti has been trafficking its orphans.
Suspecting foul play, we’ve been investigating for the last year. We’ve not been ready to go to the media until we had the facts.
As a result, the orphanage director is now in jail, but the 75 children left in the orphanage are still in danger. A worker said, “The kids are in terrible condition – the doctor gave them some prescriptions, but we doubt that the medicine will ever be administered to the children. Instead, the medicine will probably be sold.”
The problem is that those running the orphanage are still protected by corrupt government officials. Our goal is to get this information to media outlets in order to put pressure on the government to protect the kids.
An AIM staff member just returned from Haiti and filed this report:

The situation at the orphanage is an EMERGENCY right now as kids are sick and dying and still disappearing.  We’re trying to mobilize any connections in politics and media to expose the corruption and put an end to it.  The lead investigator, said we “hit the jackpot of corruption.”
What we’ve discovered:
•    Food gets donated to SOG orphanage, but disappears very quickly, while children remain malnourished.
•    Reports by the children of physical abuse by orphanage workers.
•    Reports by the children of sexual abuse by orphanage workers.

•    Clothing when donated, instead of going to orphans, gets sold.
•    Dozens of children have disappeared.

Another report about Katia illustrates the urgency we feel:

One five year-old girl, Katia was in the worst condition I have seen of any of the kids. A couple of months ago she had mumps from head to toe; a month later she was in a body cast that covered her from her waist to her feet. When he found her on Saturday she had an extremely high fever and like all of the other children – horrible skin conditions. She was lying on a bench and someone moved a bench towards her but she didn’t have the energy to move out of the way. She has lost most of her weight and she couldn’t even lift her head. After pleading with the “caretakers” of the orphanage, they released her to let us take her to a local medical clinic.

The doctor at the clinic examined her and determined that the infections are destroying her; she is nearing death. She only weighed 14 pounds. He told us that if she doesn’t get proper care right away she will die of infections and malnutrition. He gave us a prescription and orders to give her a high protein drink and medicine three times a day for the next two weeks.

We can’t waste any time as the kids are in serious jeopardy right now. I have the complete file and can email it to you if you’ll contact me by email. Please distribute this blog by twitter. Use these hashtags: #cnnfreedom, #endslavery, #not_for_sale
You can also sign this petition.  We are petitioning CNN to bring their international media voice and passion for ending slavery into the Son of God Orphanage. Please urge CNN to expose the corruption within the Haitian government, and allow international organizations to secure the children from the child traffickers who are now controlling the orphanage.
Thanks for caring.