Yesterday another powerful earthquake hit Nepal. This one registered a 7.3 on the Richter Scale. World Race leader Dusty Dills said this about it: “It was like being in a war movie. It seemed bombs were dropping all over the mountainsides. However, those dust clouds were 100’s of homes collapsin…
By Seth Barnes
13 May 2015, 12:05 am
By Seth Barnes
13 May 2015, 12:05 am

Yesterday another powerful earthquake hit Nepal. This one registered a 7.3 on the Richter Scale. World Race leader Dusty Dills said this about it:

“It was like being in a war movie. It seemed bombs were dropping all over the mountainsides. However, those dust clouds were 100’s of homes collapsing to the ground as the ground became so unstable, it was impossible to stand. This was followed by screams from all directions from the locals. I’ll never forget those 30 seconds. It seemed like an eternity”

8,000 people died in the first quake, and many more were already homeless and without food and water when this second tremor struck. 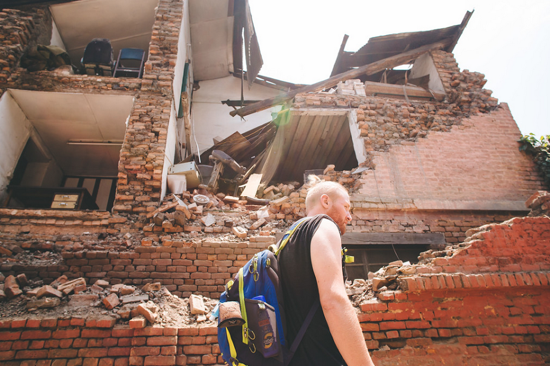 Yes, it is devastating. But there is reason to hope. The World Race’s P Squad is already in Nepal helping with relief efforts. They are supporting the recovery of the Nepali people and they report that they have found much joy, hope, and love in the midst of the sorrow and destruction.

Eva Crawford of P squad says, “I watched the people in this community who had been traumatized by an earthquake that took the very little they had right from under them, a people who had lost loved ones, rise up…. They are already rebuilding.”

At Adventures, we are in a unique position to help those most affected by disasters like this one. P Squad was in neighboring India when the first quake hit, and with a few days of logistics support from the States, they entered the country and got to work.

They know how to do this — this is a squad that has been toughened by tragedy and has seen the miracle of healing, even within their own team. They were ready to sacrifice themselves for a cause like this.

You can help. Pray for those affected by the earthquakes. Pray for speed of rescues and for healing and for miracles. Ask God to equip our racers with gifts and opportunities and divine appointments that only our God can orchestrate.

If you want to help in a tangible way, you can give to the work the P Squad is doing. Your gifts will go directly to food, water, shelter, clothing and medical care that the squad is distributing directly to the people who need it most.

God calls us to look after the least of these. Right now, that’s the people of Nepal.

You can help by giving here.