His eye is on the sparrow 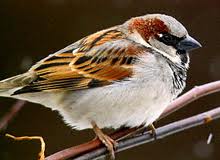 Unexpectedly on my way home from work, I was witness to a minor tragedy.
Because
our mailbox only closes part way, an enterprising sparrow was able
to get into it and build a nest. The mailman continued to deliver
the mail even as, over the course of a few weeks, all manner of twigs and leaves began to fill our
mailbox.
It had become one of the highlights of my day to get the mail each afternoon. Inevitably as I slowly opened the mailbox, the frightened sparrow came flying out.
But yesterday, the mailbox was tighter than normal – almost closed shut. As I opened it, there was none of the usual commotion. Upon closer inspection, there was momma sparrow, dead inside. Apparently, she’d been trapped and couldn’t get out.
A pang filled my heart. I had grown fond of her and her unorthodox ways. I was rooting for her as she added more and more stuff from the forest to her abode.
I reached in to examine her nest and looking inside, saw five eggs. This further compounded the tragedy of the whole thing.
There’s an old hymn entitled “His Eye is on the Sparrow.” I like it (especially as song by Tanya Blount below). It’s reassuring that God cares for little birds in the same way I do.
The song’s lyrics are inspired by Jesus’ pre-field preparation talk to his disciples in Matthew 10. He’s telling them not to take anything and they’re worried sick. And he’s saying, “Are not two sparrows sold for a penny? Yet not one of them will fall to the ground outside your Father’s care. And even the very hairs of your head are all numbered. So don’t be afraid; you are worth more than many sparrows.”
Life is precarious. As that little sparrow showed me, it can be cut short in a second. I’m glad that God holds my life in his hands.  If you feel tempted to worry or to fear, maybe this song and the words of Jesus will help.