Hover over the chaos

Chaos seems to be the state of nature. Everything loses heat and dies; then chaos ensues. The world began in chaos and seems to tilt that direction. At least it does at my house during the Christmas season. We watched “National Lampoon’s Christmas Vacation” this week and could relate….
By Seth Barnes
13 December 2011, 12:12 am
By Seth Barnes
13 December 2011, 12:12 am 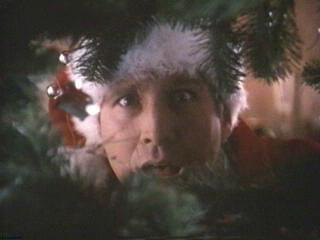 Chaos seems to be the state of nature. Everything loses heat and dies; then chaos ensues.
The world began in chaos and seems to tilt that direction. At least it does at my house during the Christmas season.
We watched “National Lampoon’s Christmas Vacation” this week and could relate. There are the Griswalds going out to the country to chop down a tree. Along the way Chevy Chase experiences a bout of road rage and nearly kills the family.
Then they cut down a tree that’s too big. And once back home, the massive light display extravaganza consumes Chase’s attention, while the visiting in-laws pollute the air with their carping and complaining.
Who can’t relate to mixed feelings about the chaos that comes with Christmas? We’ve got three sets of guests scheduled to come through. All need food, fun, and our full attention.
Although our family’s entire female population participated in Black Friday, I abstained and still face the wonderful prospect of doing the Christmas shopping. Like a lot of men, I’m fairly clueless and will probably wait until the last second and then go buy stuff that will just get returned anyway.
The prospect of the chaos to come is almost as daunting as the actual chaos itself.
It helps to remind myself that in the grand scheme of things, God’s charge to Adam is still his
charge to us. We who are created in his image need to implement his strategy.
Look at the five tasks God gave Adam in Gen. 1:28:

God created Adam as an order-bringer. God established a pattern for bringing order
right off the bat (Gen. 1:2) by “hovering over the chaos.”
Just as God brought order to the chaos, just
as he charged Adam with the task of bringing order, so we are to hover over the
chaos in our lives, exercising our God-delegated authority to bring order.
Entropy is ever at our doorstep and evil
perpetually contests our delegated authority. Given that evil’s strategy is to defy authority and
increase chaos, how important is our job of countering evil as men and women created in God’s image? Given our charge, we need to be prepared to “let it feel the weight of our presence.”
You may saying, “Don’t overspiritualize this. That’s just
life.”
My reply to that is that our default is a Western world-view that blinds us to
spiritual reality. If you were to have
grown up in Africa, for instance, you would
have a healthy respect for the every-day reality of evil.
You probably would not be so
quick to discount its role in your life.
As an African Jesus-follower, you would take seriously the authority he
delegated you (in Matt. 10:1 and Matt. 28:18) to confront evil by driving out
demons and healing sick people.

Look at your life; can you see the areas where evil is
contesting your authority? Look at the
way chaos has infiltrated your family.
Look at the bad habits you fight.
Look at the compromises you are tempted to make – all are evidence of a
titanic battle being waged at every level for control of the earth.

Our task is to engage in the battle and our
role in it. The majority of American
Christians feel impotent in the fight against
chaos. They complain about circumstances
as though they had no delegated authority and were selected for special
suffering by evil.

The truth is, everyone is caught up in a ragged battle for
control of this world. Our struggle is
against the powers of this dark world and against the spiritual forces of evil
in the heavenly realms.” (Eph. 6:12)

Our posture in this conflict is to be offensive – to be an
affront to evil, to take back territory that it has expropriated from our Lord
and master. In short, we have been
delegated the job of taking dominion.
God’s word to man hasn’t changed since the days of Adam.

Our home may not have reached the chaos level of  the Griswalds yet, but we’re prepared for the worst. In our corner of the world, we are prepared to fight chaos one
problem at a time.