How do you build community?

We go to church to worship God together in community.  But too many of us still put on our Sunday best before we go.  We think community is some kind of glorified talent show where we display our gifts to one another.  But it’s the opposite.  We build community by sharing our poverty with one another.  That’s the secret of AA – its members know only too well their poverty.  We come together painfully aware of our own shortcomings and issues.  When we compare ourselves with others, we can’t measure up.  We secretly stagger under the burden of trying to keep up appearances and we wonder if anyone could possibly understand our inner turmoil. 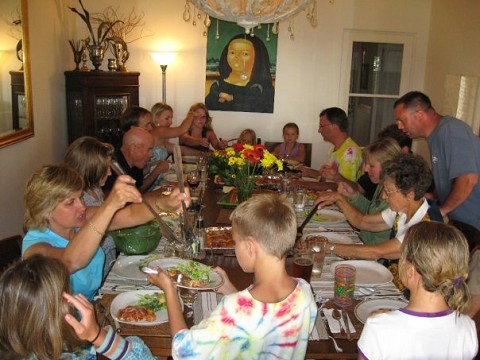 Why do I get triple the comments on my blog when I write about an area where I’m weak as I do in describing a strength?  It’s because people realize they’re not as bad as they thought – we all struggle with weaknesses. So, when I share my weakness, it activates community.

When a friend shares their inadequacy, it sparks something inside.  Their success would only underscore our failure.  But when someone shares their poverty, it touches us and disarms us and our own problems don’t seem so big.  We feel compassion and we connect – community is born.

That’s why Jesus began his public ministry (as described in Luke 6) by talking about different kinds of poverty – people who lack money, food, laughter, and acceptance.  Their poverty represents an opportunity for church to be formed.

When we bring our poverty to community it creates the opportunity for love expressed through giving (check out 2 Cor. 8:2-3 on this).  This poverty can only be assuaged when God’s people fill the gaps by giving.  In Luke 6:27-30, Jesus shows us examples of some things we can give.

These are all precious gifts that poverty requires.

Think about the times you’ve really connected as a community, times when you’ve clearly had church.  Hasn’t it happened when someone first showed their poverty?  The original church described in Acts 2:45 was activated by poverty and has been the idyllic basis for Christian community ever since.

Illness or disability is a form of poverty.  Karen and I carry with us a permanent sense of poverty because of the disabilities of one of our children.  And we have instant community with parents whose children have similar issues.

When we minister to the poor we connect with God and form community with him.  That’s why giving to widows and orphans, who carry their poverty with them as a part of their identity, is a form of true religion.  Those whose poverty is a part of their identity, people who can’t provide for themselves require our giving and pull compassion out of even the most stony hearts.

To build his church, Jesus leads us into poverty and need.  It’s the birthplace of community.