How do you respond to beggars? 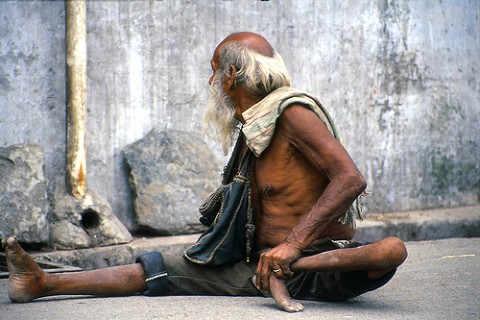 I’ve found that my compassion for beggars has tended to wane. I don’t know if it’s a good thing or a bad thing. I think Jesus would gravitate towards people like this, but I just don’t much anymore. The beggars here never see a cent that they earn anyway. They sit and beg and at the end of the day turn all of their money into the begging syndicate, a council that more or less is structured a lot like the mafia.

Imagine begging for eight hours a day and never seeing a penny that you earn.

I sat there and wrestled with my conscience for just a few seconds.  But I kept seeing this man out of the corner of my eye, sitting on the ground, one leg curled in with a clubbed foot, the other sticking straight out, stiff as a board, with yet another clubbed foot. He dragged a small wooden cane along with him. His clothes were rags and his beard caked with dirt.

And then there arose this battle in my spirit, almost as if the forces of darkness were grappling fiercely with the power of Light within me. I swear there was a physical battle in my stomach.

Through the sea of white people, bicycles, and salesmen, I made my way towards this child of God who perched himself on the ground, reaching his cup as high as he could for some spare change. Tourists were dropping in coin after coin as I began raising my voice. I just locked my eyes on this guy and started speaking life into him.  Next thing I know my hands on this man’s shoulder, as I’m hunched over, looking directly in his eyes, he in mine, and I won’t move.

I spoke life into his bones, I prophesied the day he would pick himself up and walk.

And even though I spoke English, I think he heard Hindi because he listened with that much intensity.
I stood, while he sat and stared.

And then I moved. I began walking away, allowing myself to be caught up in the movement of the world. I didn’t see a man walk. I didn’t reach out my hand and invite him into a world of faith, into the grace, mercy, and love of Jesus Christ.

I’m always one step behind.

And so I wonder if I keep up this lifestyle of always being one step behind myself if I’ll ever see a difference made in this world. I mean I should have reached out my hand and seen if he would have grabbed it, if he would have put down his cup and pulled himself to his feet, but I didn’t. He didn’t. I just walked away with a varying lack of faith resonating in my bones and his. Or did I?

Postscript: The following month, Matt had another experience with a beggar like this man on the streets of Ho Chi Minh City. Having thought through his response for a month, Matt left that interaction with no regrets. I love how God is all about second chances.