Yesterday I began telling the story of General Russ
Weiskircher, who had helped liberate Dachau concentration camp. He lives 40 minutes from us, so I called him up and asked if I could bring my children by one
Saturday morning to hear his story. Here is the conclusion: 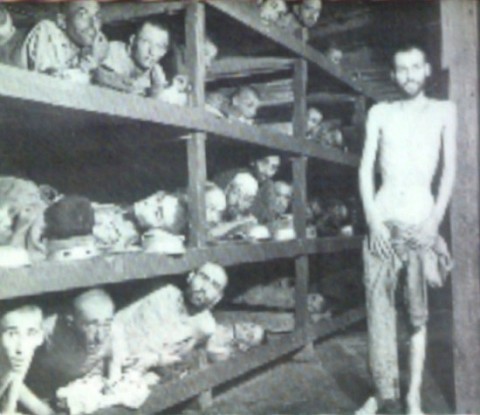 We couldn’t feed the camp prisoners because they couldn’t
eat. We gave them bullion cubes, but
many of them died anyway.

A little
girl, about six years-old, crawled up to the barbed wire. And all she knew was
she used to have a mommy and her name was “mommy.” The girl’s name was the number tattooed on her arm.
She didn’t know her name.

In the midst of this I found this little German officer who was in
charge. He informed us that he was
hiking to the mountains and passing thru.
The prisoners all said, “he’s the one in charge.” I went over to get him. I told him that he should surrender. He said, “I won’t surrender to an American
sergeant because I am a major and you are a sergeant.”

I said, “go over there.” I was mad enough to kill him, but took my
carbine and hit him over the head and broke the stock. He fell to the ground and screamed for
morphine.

For 30 minutes there was chaos. Some of our people left there in straight
jackets or handcuffs.

Then everybody heard about what we’d found and they wanted
to see it. We had to keep out the curious
people. I picked up a Leica in the
commandants office – that was the first thing I liberated in the camp. I went around for
days and took pictures.

With each passing minute, sanity returns. Up comes a General [not named here so as not to offend his family] and his staff. The General was
put in his position so that he could get good PR and ride in a parade in New
York and then run for the governor of New York.

The hotheads have subsided and order is returning. The radio won’t quit, everybody calling
in. General Bradley and others.

My colonel doesn’t care what I did. I go back for three days and get
pictures. A woman named Maggie, a reporter, the General’s concubine, comes in.
She is trying to interview the prisoners. We grab her like a sack of flour. We take her back and handcuff her to the
jeep. The General goes over to my
associate and hits him. The kid said,
“You’re a dead man. I’m going to write
you up.” So then the General goes
around getting names.

My boss calls Gen’l Fredericks and he offers
support. And then the war is over and
then all the protective brass go away.
And then the General crawls out from under a rock with his claims about me and the others. So they send the court martial charges on us to
Gen’l Patton. He summons us to a suburb of
Munich and he had an apartment for his office.
Our colonel went in to talk to him.

George Patton comes out and he had his pearl handled
pistols. We’re standing there rigid and
fearful. What will he say? Will he court martial us? Our knees are knocking.

He says, “Gentlemen, General
Patton salutes you. These charges are
ridiculous! You were taught to kill, and
you killed. I will make sure you are all
decorated. And if the person who tendered
these charges is not a civilian, I will make him one!”

The General who charged us was told about this and he got back to the
U.S. and became a civilian. But he never
was in a New York parade and never became governor of New York.

In the Dachau guesthouse there was a guest book. The local Germans could parade their families through the camp to
see what was happening to the Jews. We
took pictures of the guestbook that had their names in it and blew them up big so that everyone could see their names. We put them on the walls outside the theaters
with a sign that said, “We want you to know that we know that you knew.”

Later the Bavarians tried to cover it up, but the
international treaty required that it be opened.
They are still trying to do that.
Now in 2001 [when this conversation took place], 1500 WWII vets are dying a day. That’s why I’m cataloging firsthand
testimonies of it.

The pictures that you see of Dachau camp are the ones I
took with that Leica camera. They later doctored the pictures to include
military people.

For further info, check out this site and this excellent Fox News interview. Weiskircher recounts his initial years in the war in North
Africa and the beachhead of Anzio, Italy here.