How NOT to come off a fast 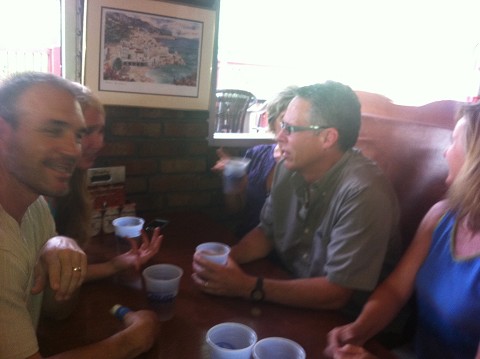 When you hit my age, the doctor sends you to a specialist who looks around in your intestinal tract for anything that might be pre-cancerous. It’s a rite of passage of sorts.
So, I’m doing that today. Since they’ll be knocking me out, I’m not too concerned.  On the other hand, the liquid they gave me to drink yesterday and the consequences that follow are nothing short of traumatic. It reminds me of what happened a couple of months ago…

It was the end of a fast. When I’d come off a much longer fast, although everyone talked about the importance of starting with a weak chicken broth, I transitioned right to solid food and suffered no ill effects. After a half a Starbucks sandwich, my atrophied stomach kicked back into life without missing a beat.

So, cocky guy that I was after a mere six day juice fast, this time I (accompanied by my family) swaggered into Little Italy and ordered a Supreme family size and a Stromboli. Three slices washed down by a beer never tasted so good.  It took me back to my days as a high school wrestler where the post weigh-in binge was normal.  You’d make up for a week of not eating in one sitting, scarfing down anything in the house that was remotely edible. In those days you never even noticed the cheerleaders at your matches because you were so busy thinking about food.

With Little Italy a blissful memory, I went to bed feeling the deep serenity of a lion after a kill.  I coasted to a dreamless sleep that lasted until precisely 3:30 in the morning.  “DING DING DING!” A 5-alarm fire siren sounded from somewhere deep inside and my stomach began to curse and hiccough and gurgle.  I awoke wide-eyed at the full-scale rebellion taking place. It was like a scene out of Star Trek where Captain Kirk yells out “battle stations!” Reflexively, I sprang into action, nearly tripping over the dog in my haste to the bathroom.

The whole next day I stayed home from the office. At times I was looking for seatbelts on the commode. I felt like a science experiment, like when you combine vinegar and baking soda in a jar and wait for it to explode.

Next time I come off a fast, I’ll be looking for the chicken broth.